About The Great Refractor

This 15-inch telescope known as "The Great Refractor" was installed at Cambridge in 1847. For 20 years it was the largest telescope in the United States, the most significant American astronomical instrument and equal to the finest in the world. It formed the nucleus for development of the Harvard College Observatory. 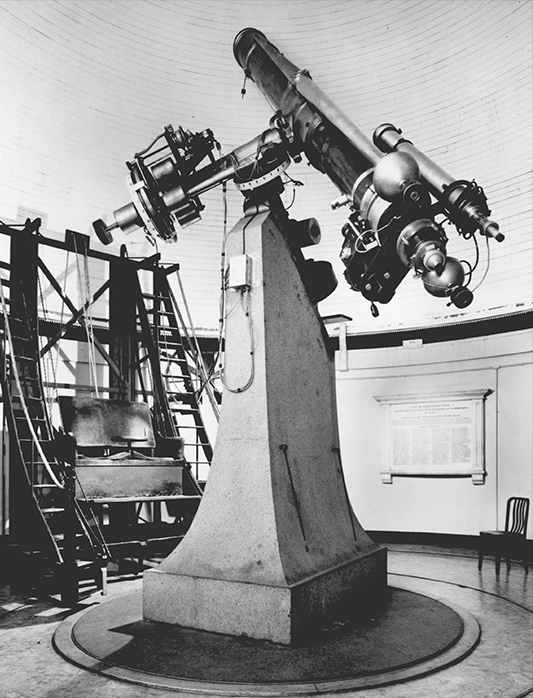 Although interest in astronomy at Harvard dated to the 17th Century, it was not until 1815 that the Harvard Corporation voted "to consider upon the subject of an observatory," perhaps the first corporate act in the United States toward establishment of an observatory. Unfortunately, the estimated cost of construction and operation far exceeded any resources and plans were suspended. Revivals of the idea in 1822 and 1823, the latter by John Quincy Adams, met similar fates.

Finally, in 1839, the Harvard Corporation voted to appoint Mr. William Cranch Bond, a prominent Boston clockmaker, as "Astronomical Observer to the University" (at no salary) and to arrange the transfer of his personal observing equipment to Dana House, which then stood on the present site of the Lamont Library in Harvard Yard. The instruments were installed that fall, and additional magnetic and meteorological equipment, including barometers and clocks, were added during the next few years.

The observatory was by no means a "first" for Harvard. The earliest known permanently fixed American telescope was installed in 1828 at Yale -- a 5-inch refractor on an altitude-azimuth mount set up in a church steeple. In 1836, a modest observatory opened at Williams College, featuring an equatorially mounted refractor in a revolving dome. Several other college observatories followed in quick succession.

Astronomical observations at Dana House were limited by lack of time and equipment until March of 1843 when a comet "of surpassing size and splendor" appeared. Public interest in astronomy was enormous, enough so to complete the subscription of funds for a truly first-class observatory. Preserved on a marble plaque in the dome are the names of the 94 donors who gave a total of $25,730. Their gifts ranged from $10 to $5,500, the latter from David Sears, who had pledged $5,000 with the proviso that others would contribute $20,000 toward the project.

The 15-inch-diameter lens for the Great Refractor was ordered that year from Merz and Mahler of Munich; it was to be a twin of the one completed in 1839 for Poulkovo Observatory in Russia. Land was purchased -- the present Observatory Hill site on Garden Street -- to which equipment from Dana House was moved in 1844, while construction proceeded on the Sears Tower to house the refractor, a residence, and various other buildings.

The Sears Tower surrounds a granite pier that rises 43 feet to the observing floor from its 22-foot-diameter base 26 feet below ground. The pier, in turn, is topped by an 11-foot-high, 11-ton granite block that carries the telescope mount. Originally, doors on three sides of the dome led to small iron balconies on which portable telescopes could be set up. Only the north balcony remains and probably is original.

The 30-foot dome, weighing approximately 14 tons, is of frame construction, reputedly built by a whaling shipwright and is sheathed in copper. The eight 8-inch iron spheres, which served as bearings on which the dome turned, were replaced in the early 1940's by a more modern support system. One of the "cannon balls," flattened from wear, is on exhibit in the dome; the rest were donated for scrap metal during World War II.

The wooden tube, veneered with mahogany, is some 20 feet long, tapering from about 16 inches at the objective (upper) end to l2 inches at the eyepiece.

The unique observing chair rolled around the telescope on circular tracks, and could be raised or lowered to put the observer into position at the telescope eyepiece.

The first observation with the Great Refractor was of the Moon on the afternoon of June 24, 1847. A number of significant achievements quickly followed. The eighth satellite of Saturn was discovered in 1848 by W.C. Bond and his son, George P. Bond, who was to succeed his father as Director in 1859. In 1850, Saturn's crape, or inner, ring was first observed, again by the Bonds. That same year, the first daguerreotype ever made of a star, the bright Vega, was taken by J.A. Whipple working under W.C. Bond, following several years of experiments using smaller telescopes. One of the earliest photographs of a double star, Mizar and Alcor in the handle of the Big Dipper, was achieved in 1857, using the wet-plate collodion process.

The Great Refractor was active for nearly three-quarters of a century. During the first 30 years, the work was chiefly determination of stellar positions and the visual observation of planets, variable stars, comets, and nebulae. After the appointment in 1877 of the observatory's fourth director, Edward C. Pickering, the telescope was employed almost entirely for photometry.

For the past 50 years, the Great Refractor has been used only for an occasional student or special research project, but still stands as an incredible example of 19th century scientific, engineering and architectural achievements.