The Center for Astrophysics | Harvard & Smithsonian advances humanity’s knowledge of the Universe by uncovering the nature of distant cosmic phenomena. But many of our greatest discoveries start with the simple act of observing. Here’s what to look for in our current night sky. (Courtesy NASA/JPL-Caltech)

What's Up for June? A planetary breakup, prime viewing for a well-known star cluster, and the constellation Lyra.

The gathering of four naked-eye planets we've been enjoying in the morning sky for the past few months – including several close conjunctions, is beginning to break up. Over the next few months, Saturn, Mars, Jupiter, and Venus will appear increasingly spread out across the morning sky – so much so that Venus and Saturn will make their exits as morning objects for most observers by September.

Look for this increasingly spaced out planetary precession in June, and note that the crescent moon jumps into the lineup on the morning of the 23rd. 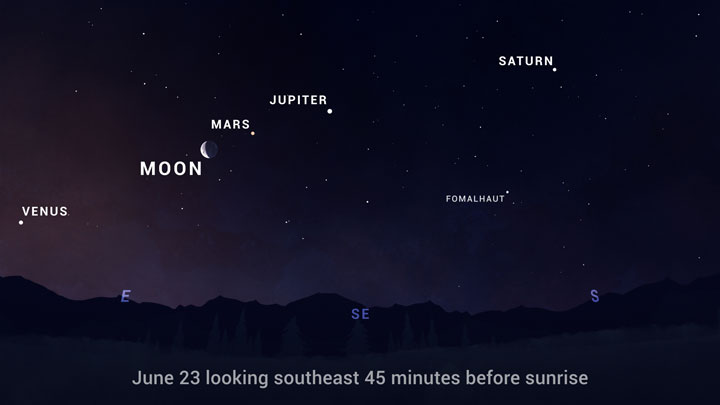 Planets continue to make a show in the morning before sunrise in June, with the Moon joining the lineup on the 23rd.

June is an excellent time to observe one of the best-known globular star clusters – M13, also known as the Hercules Cluster. Globular clusters are spherical collections of stars, tightly packed together in their centers. M13 itself contains several hundred thousand stars.

Globular clusters are also extremely old. The stars in M13 are thought to be around 12 billion years old, which is approaching the age of the universe itself. Our home galaxy, the Milky Way, is known to have about 150 globular clusters. They orbit outside the galaxy's disk, traveling tens of thousands of light-years above and below its spiral arms and most of its stars. 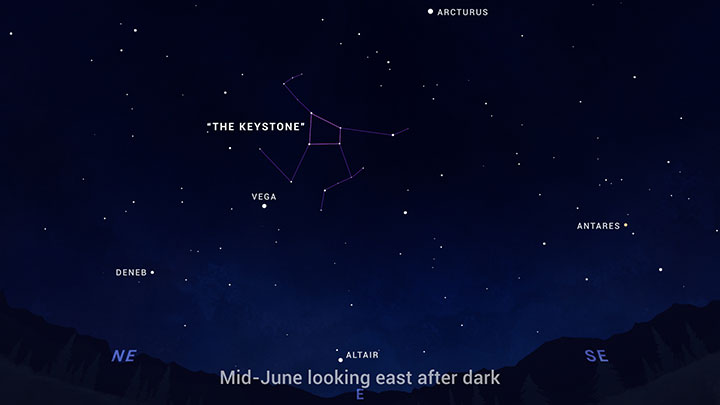 Find M13 in Hercules by first locating the stars that form the Keystone, about a third of the way between bright stars Vega and Arcturus.

Now, the Hercules Cluster is best observed with a telescope, and larger telescopes will allow you to see more of the cluster's stars. But you can also find it with a pair of binoculars, where it'll look like a hazy little spot.

Find M13 in the constellation Hercules, which is high in the east in the first couple of hours after dark in June.

First look for the bright stars Vega and Arcturus.

Then find the four stars that comprise "the Keystone," which is the pattern making up the central part of Hercules.

You'll find M13 about a third of the way between the two stars on the western, or leading, side of the Keystone.

So check out the Great Globular Cluster in Hercules, M13, in June, and find yourself staring at an ancient gathering of stars that soars high above the Milky Way. 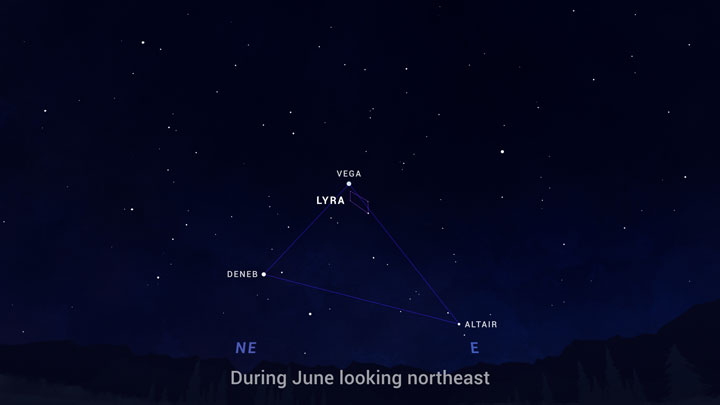 Lyra is easy to locate in the sky, thanks to the brightness of Vega, which is part of the Summer Triangle asterism.

It represents a lyre, or harp, played by the musician Orpheus in Greek mythology.

In Arab cultures, as well as ancient Egypt and India, Lyra was seen as an eagle.

And the Inca of South America saw it as a llama.

Find Lyra by looking for Vega, which is the westernmost of the three bright stars in the Summer Triangle.

In the Northern Hemisphere, you'll find it halfway up the eastern sky in the first couple of hours after dark in June.

Vega is by far the brightest star in Lyra.

It's the fifth brightest star in the sky and the second brightest in the Northern Hemisphere, after Sirius.

A pair of binoculars will help you see the others stars in Lyra, which form a sort of parallelogram hanging beneath it.

It's sometimes described as looking a bit like a diamond ring, with Vega as the diamond.

And that's not the only ring in Lyra. It's also home to the famous Ring Nebula, where a star has blown off most of its outer layers, leaving behind a remnant star known as a white dwarf.

So let the bright star Vega lead you to Lyra, the harp constellation, in the June sky. And if you see it as an eagle, or a diamond ring, or a llama, well that's perfectly okay too...