Designing the next generation of X-ray observatories isn’t simply about making the largest telescopes possible. Instead, scientists and engineers are looking to new materials and techniques to improve the way these telescopes capture X-ray photons. The Romaine Laboratory at the Center for Astrophysics | Harvard & Smithsonian is developing a new design for X-ray telescope mirrors that is lower density and lighter weight than current designs. The lab is also developing similar designs for use in focusing neutrons, which are used in a variety of physics experiments. The Romaine Lab is directed by Dr. Suzanne Romaine of CfA. 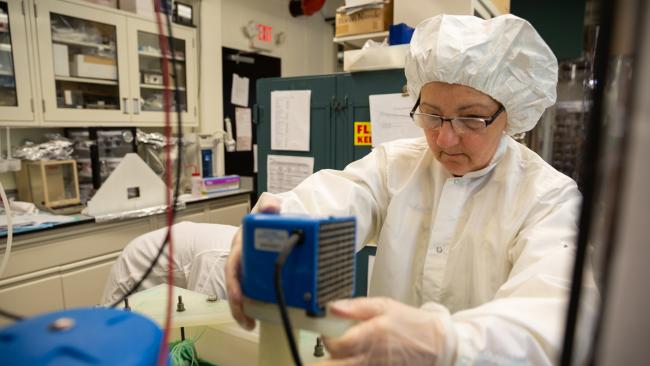 Suzanne Romaine working in her lab at the Center for Astrophsyics | Harvard & Smithsonian in Cambridge, MA.

Designing the Next Generation of Mirrors

X-ray photons embed themselves in materials due to their high energy, so X-ray telescopes can’t use ordinary mirrors. Instead, telescopes such as NASA’s Chandra X-ray Observatory use “grazing incidence” reflectors, where photons skim across the mirror’s surface at an oblique angle, much like a rock skipping on a pond. The telescopes consist of a group of these reflectors, nested together to focus the light onto detectors.

Current grazing incidence reflectors used in Chandra and other observatories are made of ceramics or metals. While these are relatively thin, they still make up a significant fraction of the weight of the telescopes. Since Earth’s atmosphere blocks X-rays, observatories have to be launched into the high atmosphere or placed in space. Weight of a spacecraft becomes a paramount issue for launch costs and practicality. This is particularly true with next-generation X-ray telescopes, which are designed to include many more layers of reflectors to create a larger area for capturing photons.

The Romaine Lab is developing a metal-ceramic reflector that’s less than one-fifth the mass of state-of-the-art designs. The lower density of the material allows for the possibility of increasing the number of reflectors within a single observatory.

In addition to using this reflector in large X-ray observatories in the future, Romaine Lab researchers and their collaborators have proposed small satellite designs. One of these is SEEJ (Smallsat Exploration of the Exospheres of Nearby Hot Jupiters), a proposed NASA Astrophysics Science SmallSat Studies mission that would observe X-ray signatures of the atmospheres of exoplanets known as “hot Jupiters” as they orbit their host stars. The SEEJ spacecraft is 5.8 kilograms in mass and under a meter in length, a much smaller telescope than Chandra or the proposed Lynx observatory.

This style of reflector is also useful in focusing neutron beams, such as those used in materials  research being carried out at Oak Ridge National Laboratory and the National Institute of Science and Technology’s  Center for Neutron Research. The Romaine Lab has also developed grazing incidence neutron reflectors for experiments, created using the same technology as the X-ray mirrors.