The Observatory and the Science

SDO is part of NASA’s Living With a Star (LWS) program of solar space observatories. It was launched in 2010 and has been operating ever since, providing data on the Sun’s atmosphere, magnetic field, and seismic waves. The SDO spacecraft orbits Earth at the same rate as Earth’s rotation, keeping in contact with the tracking station at White Sands, New Mexico.

Variations in the Sun’s interior manifest themselves in seismic waves — “sunquakes” — on the surface, which in turn produce measurable variations in the Sun’s light output. The Sun’s magnetic field also varies over a period of roughly eleven years, altering the number and distribution of sunspots on the surface. These processes also affect solar weather: the bursts of particles that stream out into the Solar System. Some solar weather affects Earth, particularly the huge coronal mass ejections that send enormous amounts of electrically-charged particles into space. When those particles hit Earth, they can knock out communications satellites, disrupt power lines, and produce other unpleasant effects.

SDO’s instruments study those phenomena to understand them better, leading to possible prediction and mitigation of the effects of solar weather. CfA engineers designed and built the Atmospheric Imaging Array (AIA), which takes images of the Sun every twelve seconds in seven different wavelengths of light to measure variations in the Sun’s atmosphere. SDO also carries the Extreme Ultraviolet Variability Experiment (EVE), which measures fluctuations in the Sun’s ultraviolet light that can affect Earth’s climate, as well as the Helioseismic and Magnetic Imager (HMI) which maps both the Sun’s magnetic field and its seismology. CfA solar researchers use data from these instruments to understand the processes driving solar weather and the heating of the corona, the Sun’s outermost atmosphere.

SDO is a complementary mission to NASA’s other solar observatories, such as the Solar and Heliospheric Observatory (SOHO) and the Parker Solar Probe, which flies through the Sun’s corona. Together, these observatories provide near-constant observation of the Sun’s surface, its magnetic field, and atmosphere. 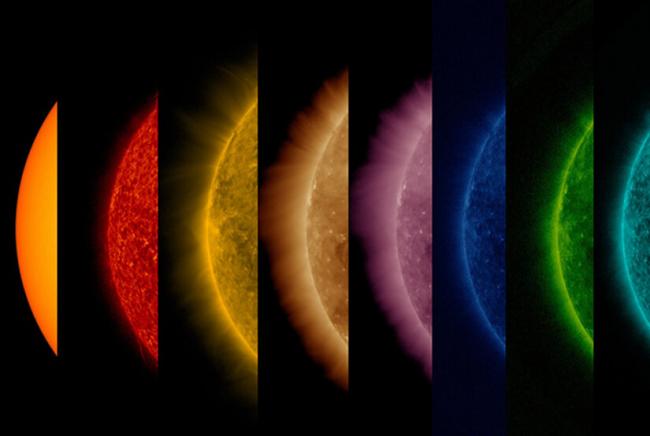 All these images show the Sun were taken nearly at the same moment, to reveal different features of the solar surface and atmosphere. The rightmost image is visible light, while the remaining pictures are in different wavelengths of ultraviolet light.