With many more exoplanets discovered every year, astronomers think planets may be more numerous than stars. TESS tests that hypothesis by scanning the whole sky for planets orbiting nearby bright stars. While Kepler focused on a single region of the sky, the TESS catalog includes both younger and hotter stars than those in the Kepler sample, along with many of the low-mass red stars known as M dwarfs. The worlds in the TESS sample are close enough to Earth that they may provide possible atmospheric data in follow-up observations.

TESS surveys the entire sky using four cameras, which together collect light from stars in successive swaths 24 degrees wide by 90 degrees long. These cameras work in two modes, capturing 2-minute exposures of the 200,000 brightest stars in the sky and 30-minute exposures of every visible star. That huge amount of data requires a great deal of advanced statistical techniques, as well as the automated analysis known as machine learning to aid astronomers. 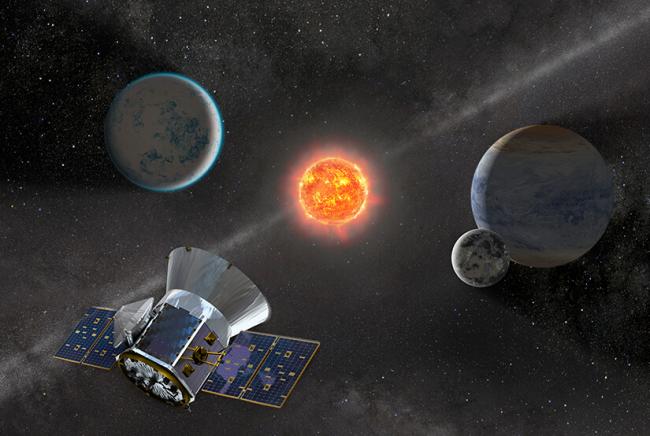 An artist's conception of TESS along with an exoplanet system it observes. This hypothetical system consists of a red dwarf star orbited by two large planets, one of which has a large moon.

Like Kepler/K2, TESS finds planets when they “transit”: pass between their host star and us, blocking a small amount of the star’s light. This method reveals the diameter of the planet and the size of its orbit. Orbits within a certain range lie in the “habitable zone”, where liquid water can exist on the surface of an Earth-like world. TESS scientists are particularly interested in potentially habitable worlds, in hopes of answering the question of how common life is in the universe.

CfA scientists are both involved with the analysis of TESS data and with observations of the exoplanets using other telescopes through the CfA-led TESS Follow-up Observing Program. These other telescopes include the MEarth observatories, the 1.5-meter Tillinghast Telescope, and the 1.2-meter Telescope at the CfA’s Fred Lawrence Whipple Observatory (FLWO) in southern Arizona, as well as the HARPS-N spectrograph on the 3.58-meter Telescopio Nazionale Galileo in the Canary Islands and the 6.5-meter Magellan Telescopes in Chile. The follow-up observations serve two purposes: verifying that TESS’ exoplanet candidates are actually planets rather than something else, and measuring the masses of worlds smaller than four times Earth’s diameter. Finding masses requires measuring the spectrum of the host star to look for Doppler shifts due to the planet pulling it slightly, an observation TESS is not able to do.

On the other hand, TESS provides a wealth of information about the stars themselves, including important data on star sizes, starspots, and other stellar properties. This helps not only characterize exoplanets orbiting those stars, but also improve our understanding of stellar structure and evolution. 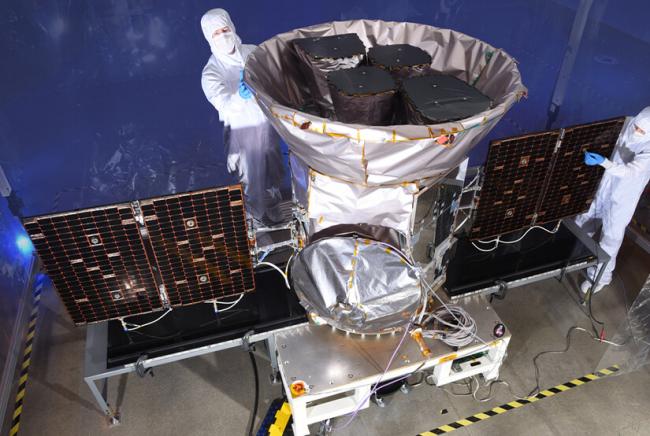 The Transiting Exoplanet Survey Satellite (TESS) in the lab, before its 2018 launch. The spacecraft's four cameras are visible within the dish; these are used to identify exoplanets orbiting the brightest stars in our cosmic neighborhood.