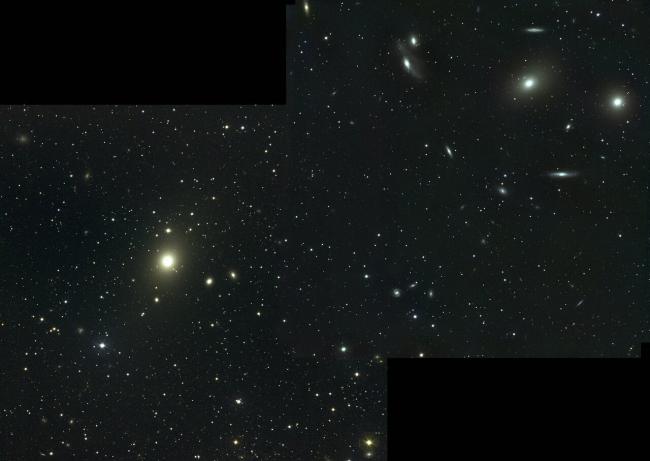 A photo of the Virgo cluster of galaxies with over 2000 members. Astronomers have concluded, using new computer simulations of galaxy clusters, that AGN feedback can regulate and quench star formation and suppress the flow of gas into galaxies.

Galaxy clusters are the largest and most recently formed structures in the universe. The closest large cluster of galaxies to us is the Virgo Cluster with about 2000 members. (The Milky Way, although not in a cluster, is in a modest-size "Local Group" of about fifty galaxies whose other large member is the Andromeda galaxy.) Between the galaxies in a cluster is the intracluster medium (ICM), space that is filled with hot ionized gas material whose temperatures can reach ten million kelvin or more. The balance between the cooling and heating of the ICM drives the properties and evolution of cluster cores but is poorly understood. Observations have found that clusters fall roughly into two categories, described approximately as those where heating decreases steadily towards the cluster’s central few thousand light-years, the “cool cores,” and those where it doesn’t, the “non-cool cores.” Other observations suggest that cool core clusters have remained unchanged since the universe was only about five billion years old, implying that a cluster’s character is set relatively early in its lifetime.

Astronomers think that feedback from one of two physical processes is responsible for maintaining cluster heating and cooling: outflows driven by active galactic nuclei (AGN, galaxies’ accreting supermassive black hole nuclei), or galaxy mergers. Early computer simulations of cluster formation favored AGN. They found that AGN could produce outflows that suppressed the inflow of hot gas to facilitate core cooling - but there were many caveats, for example the abundance of heavy elements in the gas. CfA astronomer Urmila Chadayammuri and her colleagues used the new ROMULUSC simulation that is able to resolve structures as “small” as a few billion solar-masses in a cluster that is about one hundred thousand times bigger. It can also account for star formation and feedback from supernovae, turbulent dissipation, and AGN accretion effects.

The astronomers find, in agreement with earlier indications, that AGN can regulate the cooling within cluster cores, and can do so without disrupting the structure of the cluster. Mergers, on the other hand, or at least head-on mergers, significantly disrupt the cluster with effects that last for several billions of years, and suppress AGN activity by several orders-of-magnitude. The AGN feedback also quenches star formation (it helps keep the material too warm to collapse into stars), while gas heated by the AGN dissipates quickly at large scales. The authors note that their simulations are for a single cluster only. They observe that studies of larger volumes are needed, but while these are not feasible with current computing they point to some alternative techniques that will be used in future work.

Reference: "Fountains and Storms: The Effects of AGN Feedback and Mergers on the Evolution of the Intracluster Medium in the ROMULUSC Simulation," Urmila Chadayammuri, Michael Tremmel, Daisuke Nagai, Arif Babul and Thomas Quinn, Monthly Notices of the Royal Astronomical Society 504, 3922, 2021.