Scientists at the Center for Astrophysics | Harvard & Smithsonian will help reveal exciting new results from the Event Horizon Telescope. 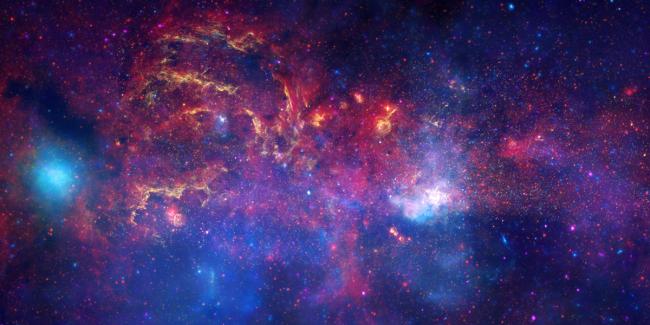 WHAT: The U.S. National Science Foundation (NSF) will host a press conference to announce a groundbreaking Milky Way galaxy discovery from the Event Horizon Telescope (EHT).

RSVP REQUIRED: Credentialed press can register to attend the event in-person by emailing eht@nsf.gov. To attend, media must register by 6 p.m. EDT on Monday, May 9. Journalists will receive a confirmation email from the NSF no later than Wednesday, May 11 if their registration is accepted. Details about submitting questions virtually will also be sent to journalists.

Immediately following the press conference, panelists and other experts from the EHT collaboration will be available for interviews at the National Press Club. The NSF and the Center for Astrophysics will issue a press release the morning of the press conference with additional information about the discovery.

In addition to the press briefing in the U.S, press conferences will be held simultaneously in Garching bei München, Shanghai, Mexico City, Santiago de Chile, Tokyo and Taipei.

A separate panel of CfA scientists will participate in a public Q&A panel at 3 p.m. EDT. The live streamed panel will be available to view on the CfA's Facebook and YouTube page. The CfA participants include:

The live stream will be moderated by Ellen Stofan, Smithsonian Under Secretary for Science and Research and former Chief Scientist at NASA.

For further information about the EHT, visit the CfA's Event Horizon Telescope webpage.

About the National Science Foundation

The U.S. National Science Foundation propels the nation forward by advancing fundamental research in all fields of science and engineering. NSF supports research and people by providing facilities, instruments and funding to support their ingenuity and sustain the U.S. as a global leader in research and innovation. With a fiscal year 2021 budget of $8.5 billion, NSF funds reach all 50 states through grants to nearly 2,000 colleges, universities and institutions. Each year, NSF receives more than 40,000 competitive proposals and makes about 11,000 new awards. Those awards include support for cooperative research with industry, Arctic and Antarctic research and operations, and U.S. participation in international scientific efforts.

The information in this press advisory is strictly for media planning purposes and is embargoed until May 12, 2022.