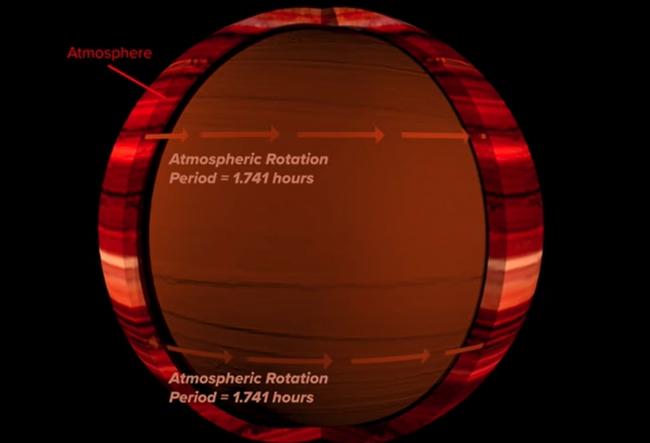 An international collaboration of scientists—with key contributions from the Center for Astrophysics | Harvard & Smithsonian—today announced the first measurement of sub-stellar atmospheric wind speed ever recorded outside the solar system using a novel technique.

Researchers focused their efforts on 2MASS J1047+21, a cool brown dwarf located 33.2 light years from Earth, and clocked wind speeds at 650 meters per second, or 1,450 miles per hour. "For the first time ever, we measured the speed of the winds of a brown dwarf—too big to be a planet, too small to be a star," said Peter K.G. Williams, Innovation Scientist for CfA and the American Astronomical Society. Williams led the radio astronomical observations that made the result possible. "The results rule out a few unusual models and prove that this new technique works and can be applied to more objects."

Prior to the study, scientists had only scientifically measured wind speeds within the solar system, leaving scientists to guess at the atmospheric natures of bodies beyond the solar system. "While we have long been able to directly probe the atmospheres and winds of the bodies in our own solar system, we’ve had to conjecture what they're like in other kinds of bodies, and if there's one thing we've learned from our studies of extrasolar bodies thus far, it's that our primary conjectures often turn out to be wrong," said Williams. "This new technique opens the way to better understanding the behavior of atmospheres that are unlike anything found in our solar system."

Using a combination of radio and infrared emissions, the new technique can be more broadly applied to those objects too far away for scientists to observe cloud movement in the atmosphere, like brown dwarfs and exoplanets. "Even though brown dwarfs are completely covered in clouds, they're too far away for us to pick out individual clouds like we do on planets within our solar system, but we can still measure how long it takes for a group of clouds to do a lap around the atmosphere; as clouds come in and out of view they change the brightness of the planet," said Williams. "This lap time depends on two things: how fast the brown dwarf itself is spinning, and how fast the wind is blowing on top of that."

Cloud movement alone, however, couldn’t produce an accurate measurement of atmospheric wind speeds on the brown dwarf, and researchers also looked to radio wave emissions for a measurement of the brown dwarf's rotation beneath its atmosphere. "It turns out that in some brown dwarfs it's possible to measure this spin rate by detecting radio waves," said Williams. "We observed a pulse of radio waves every time the brown dwarf rotated. This is because the radio waves come from high-energy particles trapped in its magnetic field, and its magnetic field is rooted deep in its interior—just like Earth—where there's no wind to alter the measurement. By taking the difference between the cloud lap time and the radio pulse time, we were able to determine the wind speed."

The study rules out some current theoretical models of how brown dwarf atmospheres work, and Williams believes the results, published in Science, will both better constrain theoretical models for the future and guide the efforts of theorists working in exoplanetary atmospheric studies.