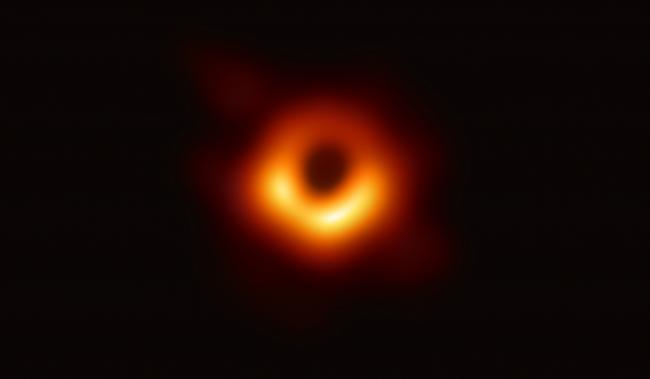 Cambridge, MA - The first image of a black hole ever taken is being released today. This monumental achievement was made possible, in part, by key leadership and funding from the Center for Astrophysics | Harvard & Smithsonian (CfA).

The Event Horizon Telescope, or EHT, is a global array of radio telescopes involving dozens of institutions and hundreds of scientists. The breakthrough discovery by the EHT is an image of Messier 87’s (M87’s) supermassive black hole in the center of the Virgo galaxy cluster, 55 million light years away. This black hole contains 6.5 billion times the mass of our Sun.

Six papers are being published in the Astrophysical Journal Letters today to describe this groundbreaking result.

“This fulfills our dream to take the first picture of a black hole,” said the CfA’s Sheperd (Shep) S. Doeleman, the Director of the EHT. “We now have access to a cosmic laboratory of extreme gravity where we can test Einstein’s theory of General Relativity and challenge our fundamental assumptions about space and time.”

Black holes are extremely compressed cosmic objects, containing extraordinary amounts of mass within a tiny region. This mass is shrouded by an event horizon, that is, the boundary beyond which nothing – not even light – can escape from the black hole’s powerful gravitational pull.

The presence of these objects affects their surroundings in extreme ways, including warping spacetime and heating surrounding material to hundreds of billions of degrees. General Relativity predicts that a black hole will cast a circular shadow upon this bright, glowing material. The newly released image of M87 from the EHT reveals this shadow.

“For decades, we have studied how black holes swallow material and power the hearts of galaxies,” says Ramesh Narayan, a Harvard University professor and a leader in EHT theory work. “To finally see a black hole in action, bending its nearby light into a bright ring, is a breathtaking confirmation that supermassive black holes exist and match the appearance expected from our simulations.”

While astronomers have studied black holes for many years, making an image requires a new telescope with unprecedented resolution so it can detect fine details. To create this, the EHT combines the signals from an array of eight existing telescopes around the globe, including the Submillimeter Array (SMA), located on Maunakea in Hawai'i. As CfA engineer, Jonathan Weintroub, explains: “The resolution of the EHT depends on the separation between the telescopes, termed the baseline, as well as the short millimeter radio wavelengths observed. The finest resolution in the EHT comes from the longest baseline, which for M87 stretches from Hawai'i to Spain.” Weintroub, who co-coordinates the EHT's Instrument Development Group, added: “To optimize the long baseline sensitivity, making detections possible, we developed a specialized system which adds together the signals from all available SMA dishes on Maunakea. In this mode, the SMA acts as a single EHT station.”

After separately recording the signals at all eight telescopes, the data are flown to a single location to be computationally combined into what would be measured by an Earth-sized telescope. “The EHT records millions of gigabytes of data from many telescopes that weren't originally designed to work together,” explains Lindy Blackburn, who led the EHT team for data processing and calibration. “We developed multiple pathways to process and calibrate the data, using new algorithms to computationally stabilize the Earth’s atmosphere and to precisely align the signals from all sites within trillionths of a second.”

Turning the EHT data into an image required developing new methods and procedures. “We weren’t ready to publish our images until after trying to break them in every way possible,” says Andrew Chael, a Harvard graduate student at the CfA, who developed a new imaging software library for the EHT. “To confirm our results, we compared images among four independent groups of scientists using three different imaging methods.” These tests were designed and led by Katie Bouman, a CfA postdoc who received her PhD in electrical engineering and computer science. Bouman explains, “We're a melting pot of astronomers, physicists, mathematicians and engineers, and that’s what it took to achieve something once thought impossible.”

Michael Johnson, a CfA astrophysicist who directs local EHT science and imaging efforts, is excited for the future. “Our image reveals that this enormous black hole -- large enough to engulf the solar system -- anchors a jet that extends tens of thousands of light years. Expanding the EHT may enable movies that reveal the dynamics of this living system, showing how the jet draws its energy from the black hole.”

The EHT and many of its key scientists are funded by a mixture of public (i.e. taxpayer) sources such as the National Science Foundation (NSF) and the Smithsonian Institution (SI) as well as the generosity of private entities including the Templeton Foundation and the Gordon and Betty Moore Foundation (GBMF). The NSF has funded steady advancement of the EHT over more than a decade and SI, administered through SAO, has provided funding for seven years. Doeleman has grants from the NSF and also from the GBMF and the John Templeton Foundation. The GBMF funded key technical developments starting in 2012 and was foundational in building the SAO group.

SAO is one of the 13 stakeholder institutes for the EHT Board, and the CfA hosts the Array Operations Center for EHT observations. The SMA is a joint project between the Smithsonian Institution and the Academia Sinica Institute of Astronomy and Astrophysics (ASIAA) in Taiwan. The Greenland Telescope, funded by ASIAA and SAO, joined the EHT for its second observing run in April, 2018.

For more information on the EHT and this groundbreaking result, visit eventhorizontelescope.org and follow @ehtelescope on social media. The website for the CfA, which is organized into six research divisions to study the origin, evolution, and ultimate fate of the Universe, is cfa.harvard.edu.

The full set of Astrophysical Journal Letters are here: