Four observed galaxies date back to less than 400 million years after the Big Bang, according to new spectroscopic data taken with Webb. 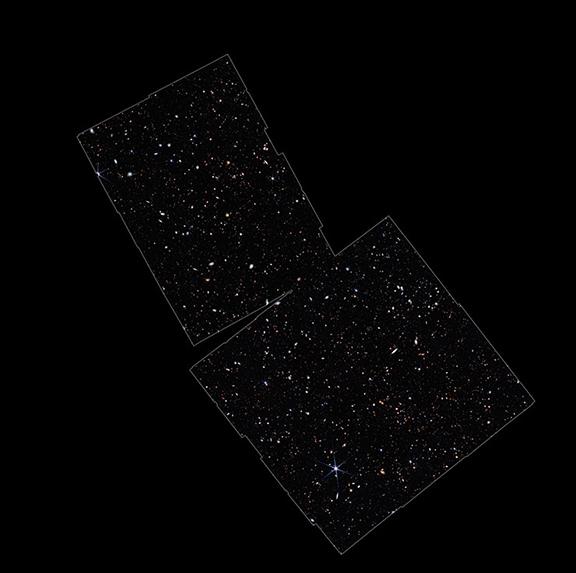 Editor's Note: This post highlights data from Webb science in progress, which has not yet been through the peer-review process.

Cambridge, Mass. -- An international team of astronomers, including two from the Center for Astrophysics | Harvard & Smithsonian, have used data from the James Webb Space Telescope to report the discovery of the earliest galaxies yet confirmed. The light from these galaxies has taken more than 13.4 billion years to reach Earth, as these galaxies date back to less than 400 million years after the Big Bang — equivalent to just two percent of the current age of the universe.

Webb images had previously provided candidates for such infant galaxies. Now, this early age has been confirmed for four galaxies using long spectroscopic observations that reveal the distinctive patterns in the tiny amount of light coming from these incredibly faint galaxies.

"Spectroscopic confirmation is the gold standard of proof," says Benjamin Johnson, a researcher at the Center for Astrophysics (CfA). "These observations show definitively that these four galaxies are truly from the distant frontier of our view of galaxies in the universe." 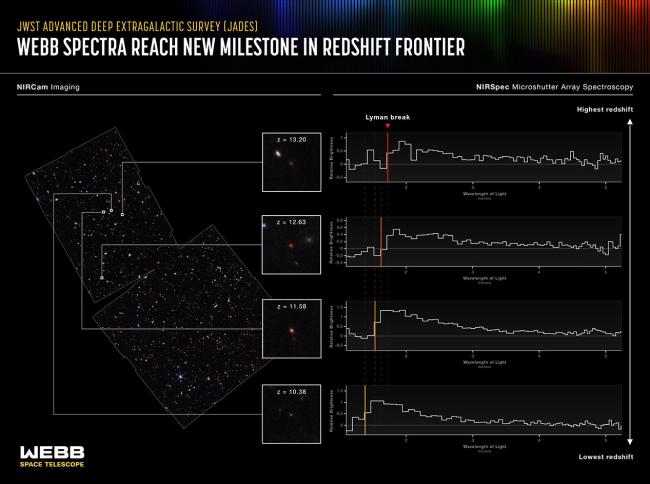 The JWST Advanced Deep Extragalactic Survey (JADES) focused on the area in and around the Hubble Space Telescope’s Ultra Deep Field. Using Webb's NIRCam instrument, scientists observed the field in nine different infrared wavelength ranges. From these images (shown at left), the team searched for faint galaxies that are visible in the infrared but whose spectra abruptly cut off at a critical wavelength. Webb’s NIRSpec instrument then yielded a precise measurement of each galaxy's redshift (shown at right). Four of the galaxies studied are particularly special, as they were revealed to be at an unprecedentedly early epoch. These galaxies date back to less than 400 million years after the big bang, when the universe was only 2% of its current age. In the background image blue represents light at 1.15 microns (115W), green is 2.0 microns (200W), and red is 4.44 microns (444W). In the cutout images blue is a combination of 0.9 and 1.15 microns (090W+115W), green is 1.5 and 2.0 microns (150W+200W), and red is 2.0, 2.77, and 4.44 microns (200W+277W+444W).
Credit: NASA, ESA, CSA, and STScI, M. Zimani (ESA/Webb), L. Hustak (STScI)

The observations result from a collaboration of scientists who led the development of two of the instruments on board Webb, the Near-Infrared Camera (NIRCam) and the Near-Infrared Spectrograph (NIRSpec). The investigation of the faintest and earliest galaxies was the leading motivation behind the concepts for these instruments. In 2015, the instrument teams joined together, starting with an initial planning meeting at the CfA, to propose the JWST Advanced Deep Extragalactic Survey (JADES), an ambitious program that has been allocated just over one month of telescope time spread over two years.

Today, JADES is an international collaboration of more than eighty astronomers from ten countries, designed to provide a view of the early universe unprecedented in both depth and detail.

"The James Webb Space Telescope was built to allow us to see to the formative early moments of galaxies," says Daniel Eisenstein, Harvard professor of astronomy, researcher at the CfA, and member and extragalactic theme lead of the NIRCam instrument team since 2001. "We designed JADES to push the limits in the first year of the mission. After over two decades of planning and development, it's fantastic to see the telescope and our program come to fruition."

These JADES observations utilize the most sensitive infrared imaging and spectroscopy ever obtained, focusing on the NASA/ESA Hubble Space Telescope's Ultra Deep Field. For over 20 years, this small patch of sky has been the target of nearly all large telescopes, building an exceptionally sensitive data set spanning the full electromagnetic spectrum. Now Webb is adding its unique view, providing the faintest and sharpest images yet obtained.

From these images, the galaxies in the early universe can be distinguished by a tell-tale aspect of their multi-wavelength colors. Light is stretched in wavelength as the universe expands, and the light from these youngest galaxies has been stretched by a factor of up to 14. Astronomers search for faint galaxies that are visible in the infrared but whose light abruptly cuts off at a critical wavelength. The location of the cutoff within each galaxy's spectrum is shifted by the universe's expansion. The JADES team scoured the Webb images looking for these distinctive candidates.

Using 55 hours of spectroscopic exposure, the team collected the light from 250 faint galaxies, allowing astronomers to study the patterns imprinted on the spectrum by the atoms in each galaxy. This yielded a precise measurement of each galaxy's redshift and revealed the properties of the gas and stars in these galaxies.

Four of the galaxies studied are particularly special, as they were revealed to be at an unprecedentedly early epoch. The results provided spectroscopic confirmation that these four galaxies lie at redshifts above 10, including two at redshift 13. This corresponds to a time when the universe was approximately 330 million years old, setting a new frontier in the search for far-flung galaxies.

Astronomers will now use the exquisite sensitivity and versatility of Webb to build on this spectroscopic milestone, exploring how the properties of these early galaxies set the stage for galaxy evolution to the present day.

JADES will continue in 2023 with a detailed study of another field, this one centered on the iconic Hubble Deep Field, and then return to the Ultra Deep Field for another round of deep imaging and spectroscopy. Many more candidates in the field await spectroscopic investigation, with hundreds of hours of additional time already approved.

In addition to Eisenstein and Johnson, three Harvard undergraduates — Katie Sharpe, Maya Skarbinski, and Natalia Villanueva — are currently conducting senior theses with the JADES data and two recent CfA postdoctoral researchers — Sandro Tacchella and Erica Nelson — have contributed to the development of the survey. The CfA group is active in the development of image analysis software for the program.

The JADES results are described in two new scientific papers, available on the preprint server arXiv.

About the Webb Telescope

The James Webb Space Telescope is the world's premier space science observatory. Webb will solve mysteries in our solar system, look beyond to distant worlds around other stars, and probe the mysterious structures and origins of our universe and our place in it. Webb is an international program led by NASA with its partners, ESA (European Space Agency) and CSA (Canadian Space Agency).