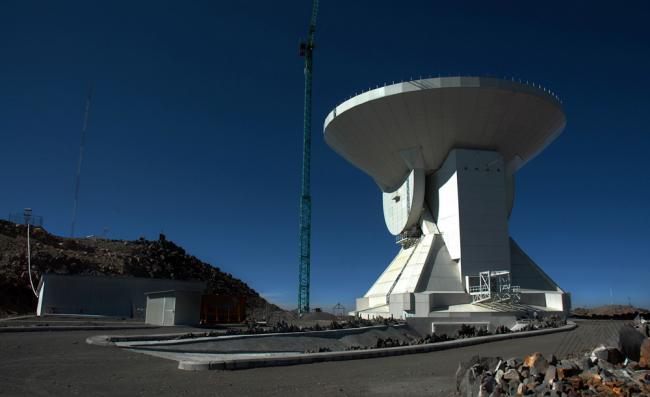 The Large Millimeter Telescope Alfonso Serrano (LMT), the world's largest single-dish steerable millimeter-wavelength telescope. Astronomers have used this newly operational facility to study the dense, star-forming molecular gas in a torus around the nuclear region of the ultraluminous infrared galaxy UGC5101, and conclude that the gas is in Keplerian motion with the densest material at the innermost radii.

Ultraluminous infrared galaxies (ULIRGs), powered by starburst activity and often with supermassive black holes accreting material at their nuclei, contain large reservoirs of molecular gas. This is to be expected: Molecular gas is the raw material for new stars and moreover the presence of the infrared luminous warm dust implies an abundance of molecular gas. Galaxy collisions often trigger star formation activity and simulations reveal that as the two galaxies merge their gas tends to fall towards the nuclear region where it develops into a disk with a radius of roughly 1500 light-years. Many such galaxies are observed to have strong circumnuclear starbursts, apparently as a result. Observations of the carbon monoxide gas (CO) in ULIRGs, an abundant but low density molecular species, have indeed found evidence for circumnuclear disks in the broad range of velocities the gas displays, characteristic of rotating disks. However, astronomers know that star formation requires the presence of gas that is 10-100 times denser than that traced by CO; they are unsure about the distribution of denser material, and also the role that the active nucleus might play in shaping the disk.

The newly completed Large Millimeter Telescope Alfonso Serrano (LMT) is the world's largest single-dish, steerable, submillimeter-wavelength telescope (its diameter is fifty meters), and is a binational project between México and the US. The submillimeter wavelengths are ideal for studying the cool, dense molecular gas in species like HCN and CS. CfA astronomer Giovanni Fazio was a member of a team that used the LMT to study the dense molecular gas in the circumnuclear disk in the ULIRG UGC5101. The astronomers observed nine molecules and found that these dense gas tracers also showed broad velocity profiles spanning about 800 km/sec, all with the double-peak shape characteristic of viewing a rotating torus slightly edge-on.

When a disk's rotation is dominated by gravitational forces, its material moves according to Kepler's laws (the same laws govern the orbits of planets) with the innermost material orbiting fastest – the opposite of the behavior for a rotating rigid disk. The scientists conclude that the circumnuclear disk in UGC5101 does follow Keplerian behavior, and because the different molecules trace slightly different density material they can use each species' Keplerian velocity to model the distribution of the density across the disk, with the higher density inner regions moving faster. The new result, one of the first for the new LMT, helps to model in more detail the structure of the circumnuclear starburst ring, its merger evolution, and its interplay with the active nucleus.