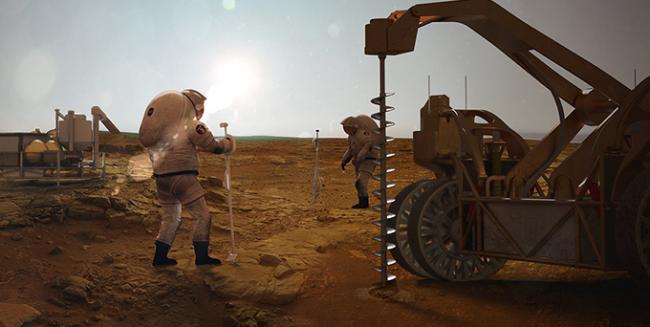 Cambridge, MA - Recent science missions and results are bringing the search for life closer to home, and scientists at the Center for Astrophysics | Harvard & Smithsonian (CfA) and the Florida Institute of Technology (FIT) may have figured out how to determine whether life is—or was—lurking deep beneath the surface of Mars, the Moon, and other rocky objects in the universe.

While the search for life typically focuses on water found on the surface and in the atmosphere of objects, Dr. Avi Loeb, Frank B. Baird Jr. Professor of Science at Harvard and CfA astronomer, and Dr. Manasvi Lingam, assistant professor of astrobiology at FIT and CfA astronomer, suggest that the absence of surface water doesn't preclude the potential for life elsewhere on a rocky object, like deep in the subsurface biosphere.

"We examined whether conditions amenable to life could exist deep underneath the surface of rocky objects like the Moon or Mars at some point in their histories and how scientists might go about searching for traces of past subsurface life on these objects," said Lingam, the lead author on the research. "We know that these searches will be technically challenging, but not impossible."

One challenge for researchers was determining the potential for the existence of water where there appears to be none. "Surface water requires an atmosphere to maintain a finite pressure, without which liquid water cannot exist. However, when one moves to deeper regions, the upper layers exert pressure and thus permit the existence of liquid water in principle," said Lingam. "For instance, Mars does not currently have any longstanding bodies of water on its surface, but it is known to have subsurface lakes."

The research analyzes the "thickness" of the subsurface region—where water and life might exist in principle—of the nearby rocky objects, and whether the high pressures therein could rule out life altogether. According to Loeb, the answer is probably not. "Both the Moon and Mars lack an atmosphere that would allow liquid water to exist on their surfaces, but the warmer and pressurized regions under the surface could allow the chemistry of life in liquid water."

The research also arrived at a limit on the amount of biological material that might exist in deep subsurface environments, and the answer, although small, is surprising. “We found that the biological material limit might be a few percent that of Earth's subsurface biosphere, and a thousand times smaller than Earth's global biomass," said Loeb, adding that cryophiles—organisms that thrive in extremely cold environments—could not only potentially survive, but also multiply, on seemingly lifeless rocky bodies. “Extremophilic organisms are capable of growth and reproduction at low subzero temperatures. They are found in places that are permanently cold on Earth, such as the polar regions and the deep sea, and might also exist on the Moon or Mars."

In terms of searching for life subsurface on the Moon and Mars, the researchers note it won't be easy, requiring search criteria and machinery not yet in use on either neighboring body. "There are many criteria involved in determining the most optimal locations to hunt for signs of life," said Lingam. "Some that we have taken into account for subsurface searches include drilling near to the equator where the subsurface biosphere is situated closer to the surface, and seeking geological hotspots with higher temperatures." Loeb added that in terms of machinery, "We need to be able to drill tens of kilometers under the surface of Mars, and without geological activity exposing these deep layers, we will not be able to explore them."

The challenges, however, don’t mean that finding life in the subsurface biosphere of a rocky body is impossible, even in the near future. "Drilling might be possible in the context of the Artemis program to establish a sustainable base on the Moon by 2024. One can imagine robots and heavy machinery that will drill deep under the lunar surface in search of life, just as we do in searching for oil on Earth," said Loeb, adding that if future missions to Mars and the Moon do unearth subsurface life, the same principles could be applied to missions headed much farther away. "Our study extends to all objects out there and indeed implies that the habitable zone is much larger than traditionally thought, since science currently considers only life on the surface of the object."

The research is published in The Astrophysical Journal Letters.