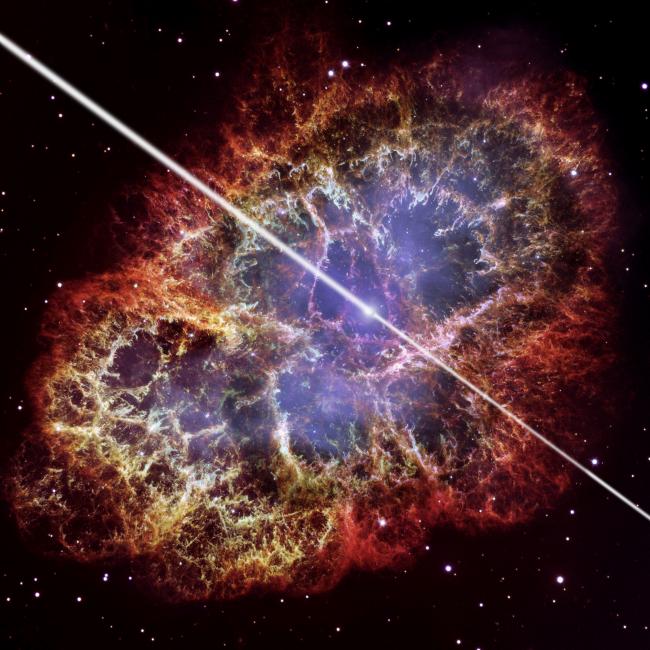 A thousand years ago, a brilliant beacon of light blazed in the sky, shining brightly enough to be seen even in daytime for almost a month. Native American and Chinese observers recorded the eye-catching event. We now know that they witnessed an exploding star, which left behind a gaseous remnant known as the Crab Nebula.

The same object that dazzled skygazers in 1054 C.E. continues to dazzle astronomers today by pumping out radiation at higher energies than anyone expected. Researchers have detected pulses of gamma rays with energies exceeding 100 billion electron-volts (100 GeV) -- a million times more energetic than medical X-rays and 100 billion times more than visible light.

"If you asked theorists a year ago whether we would see gamma-ray pulses this energetic, almost all of them would have said, 'No.' There's just no theory that can account for what we've found," said corresponding author Martin Schroedter of the Harvard-Smithsonian Center for Astrophysics (CfA).

The gamma rays come from an extreme object at the Crab Nebula's center known as a pulsar. A pulsar is a spinning neutron star -- the collapsed core of a massive star. Although only a few miles across, a neutron star is so dense that it weighs more than the Sun.

Rotating about 30 times a second, the Crab pulsar generates beams of radiation from its spinning magnetic field. The beams sweep around like a lighthouse beacon because they're not aligned with the star's rotation axis. So although the beams are steady, they're detected on Earth as rapid pulses of radiation.

The discovery was reported by an international team of scientists in a paper in the October 7 issue of Science. Corresponding author Nepomuk Otte, a postdoctoral researcher at the University of California, Santa Cruz, said that some researchers had told him he was crazy to even look for pulsar emission in this energy realm.

"It turns out that being persistent and stubborn helps," Otte said. "These results put new constraints on the mechanism for how the gamma-ray emission is generated."

Some possible scenarios to explain the data have been put forward, but it will take more data, or even a next-generation observatory, to really understand the mechanisms behind these gamma-ray pulses.

The gamma-ray pulses were detected by the Very Energetic Radiation Imaging Telescope Array System (VERITAS) -- the most powerful very-high-energy gamma-ray observatory in the Northern Hemisphere. VERITAS is located at the Smithsonian's Whipple Observatory, just south of Tucson, Ariz.

Astronomers observe very-high-energy gamma rays with ground-based Cherenkov telescopes. These gamma rays, coming from cosmic "particle accelerators," are absorbed in Earth's atmosphere, where they create a short-lived shower of subatomic particles. The Cherenkov telescopes detect the faint, extremely short flashes of blue light that these particles emit (named Cherenkov light) using extremely sensitive cameras. The images can be used to infer the arrival direction and initial energy of the gamma rays.

This technique is used by gamma-ray observatories throughout the world, and was pioneered under the direction of CfA's Trevor Weekes using the 10-meter Cherenkov telescope at Whipple Observatory. The Whipple 10-meter telescope was used to detect the first Galactic and extragalactic sources of very-high-energy gamma rays.

VERITAS continues the tradition of Whipple's 10-meter telescope. It is comprised of an array of four 12-meter-diameter Cherenkov telescopes. VERITAS began full-scale observations in September 2007. The telescopes are used to study the remnants of exploded stars, distant galaxies, powerful gamma-ray bursts, and to search for evidence of mysterious dark matter particles.