What the quest to image black holes could tell us about our universe. 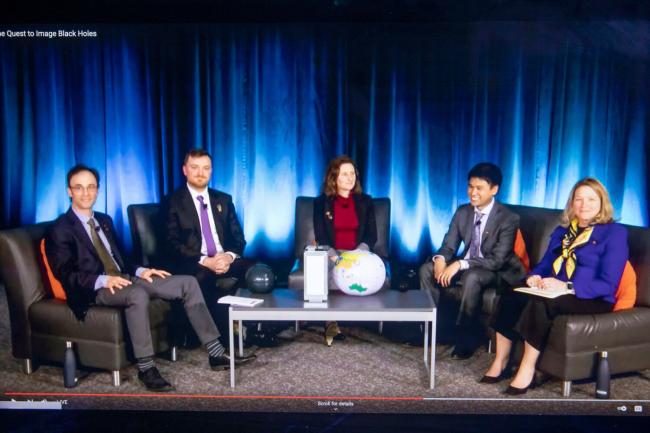 Hours after unveiling the first image of the black hole at the center of the Milky Way, scientists from the Harvard & Smithsonian-led team discussed its significance in an online panel.

Not long ago, the idea of photographing a black hole was as quixotic as photographing a unicorn. Now, scientists have not one but two images of two different supermassive black holes — and they both look as magical as flaming doughnuts.

"I remember when black holes were purely theoretical," says Ellen Stofan, under secretary for science and research at the Smithsonian and former chief scientist at NASA, during a post-reveal panel on Thursday. Moderated by Stofan, the conversation brought together four members of the Harvard-led team of scientists that in 2019 revealed to the world the first image of a black hole — a behemoth dubbed M87 after its galaxy, Messier 87. Hours before the panel discussion, the team shared a second image — a close-up of Sagittarius A-star (or Sgr A*), the black hole snacking on light and cosmic debris at the center of our very own Milky Way galaxy.

"There can be no doubt now that we've seen black holes for the first time," says Shep Doeleman, founding director of the Event Horizon Telescope collaboration, an international team of more than 100 scientists led by the Center for Astrophysics | Harvard & Smithsonian. "It's the dawn of a new era in astronomy."

In this new era, scientists could prove — or disprove — Einstein's long-held theories of gravity and relativity, find Earth 2.0, or discover a wormhole to another universe. (The latter won't be so hard for Doeleman, who says, cheekily, that he comes from another universe.)

Photographing a black hole is even harder than it sounds. To capture images of objects so far away, "You'd need a telescope the size of the Earth," says Kari Haworth, an engineer and the chief technology officer for the Center for Astrophysics. "We didn't do that because that's impossible, and it would ruin a lot of people’s views," she says.

Instead, the researchers turned the Earth into a giant telescope by coordinating individual machines positioned in Hawaii, Chile, Mexico, Spain, France, and other locations. Each team had to snap a photo at the exact same time. Because black holes gobble up everything that gets too close — even light — they cannot be seen. But their massive gravity pulls in and compresses nearby light and debris, creating a spinning gaseous eddy that's teeming with energy. "Turning falling matter into luminosity," was how Doeleman put it.

That luminosity can be seen and photographed. Some of the light that gets pulled into the black hole's gravitational field makes a U-turn or a loop-de-loop before escaping and shooting off in the direction of Earth, carrying an image of where it came from. The EHT team’s final photograph is a composite of pictures taken by each telescope and stacked one on top of each other. To combine all that data — which is light, captured at a very precise moment in time — the team needed to achieve one more strange feat. Each telescope team froze their light, stored it on hard disks (it's too massive to send across the internet), and flew it, by airplane, to one central location.

M87, the first black hole to get the star treatment, is about 1,000 times larger than Sagittarius A-star and far more stable, but the images came out nearly the same, a coup for the EHT — and Albert Einstein. Einstein theorized that black holes have only three characteristics — mass, spin, and charge — and no "hair" (as astrophysicists like to call additional properties). The only difference is a slight blur in the image of Sagittarius A-star. Our galaxy's black hole is fussier, as fidgety as a toddler, and it's harder to capture a clean picture of something that's constantly changing, says astrophysicist Paul Tiede. Plus, there's some cosmic soup between us and Sagittarius A-star, which obscures the images ever so slightly. "Even given this," Tiede says, "I'm still struck with how similar these images are."

By the way black holes are described, you might expect them to be insatiable monsters, sucking in everything in space like a bathtub drain. Not exactly. While they are the most powerful objects in the universe — Doeleman says a black hole formed from folding the Earth in half could power Manhattan for a year — they're not gobbling up entire galaxies, just warping space-time and displacing objects from their intended paths.

That's good news because the EHT team suspects there's a supermassive black hole at the center of every galaxy. But even with these new images, Tiede says, "We know barely anything about them." (Asked why the black holes are doughnut-shaped, he replies, "Because they're delicious.")

"Black holes live at the frontier of our current knowledge of physics and astrophysics," says Angelo Ricarte, who brought his pet black hole named Poe — a soft black orb with two googly eyes — to the panel discussion. These new images are already helping Ricarte and other scientists study the strange physics of the superheated gases orbiting the black holes, as well as how the behemoths spew jets of these gases a million light years in any direction. Those jets, Ricarte says, could help explain "our cosmic origin story," have profound effects on how our galaxy evolves, or bridge theories of the very big with the very small to support a theory of everything. "There are a lot of things we still don’t understand fully in this extreme environment," he says.

To gain a better understanding, Doeleman wants to build an even bigger telescope by putting another imaging device on a satellite orbiting the Earth. He also hopes to capture something more exciting than a photo of a black hole: a movie of a black hole.

"If we could time the orbits of matter, that would be a completely different test of Einstein's theory," he says.

This story was written by Caitlin McDermott-Murphy and originally appeared in the Harvard Gazette.