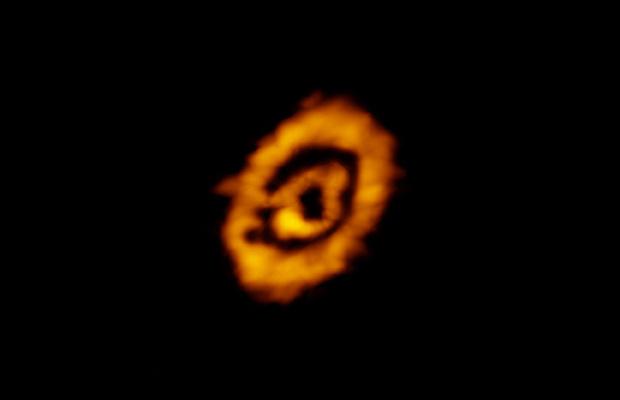 A false-color, submillimeter wavelength image of the protoplanetary disk around the star IM Lup showing dual rings of gas and dust.  Astronomers for the first time have determined the vertical heights of both the dust and gas components in this and two other protostellar systems using multiwavelength datasets, finding that at large distances from the star they sometimes but not always have the same flaring profile.

Planets form as the dust grains in a protoplanetary disk grow into pebbles and then finally into planets. Because small dust grains interact with gas (via the drag it imparts), the gas in protoplanetary disks influences the distribution of small grains and hence the growth of planets. Astronomers trying to unravel how dust-gas interactions affect planet development are particularly interested in studying the disk thickness (its "vertical height") versus the distance from the star; the disk flares outward in most cases where the central star dominates the mass of the system. By independently measuring the heights of the gas and the small dust grains, astronomers can study fundamental disk characteristics such as the gas-to-dust mass ratio and turbulence in the disk.

CfA astronomers Richard Teague and David Wilner and a team of colleagues have completed the first direct comparison of gas and dust vertical heights. They modeled archival multiwavelength observations from ALMA, Hubble, and Gemini in three planetary disks particularly suitable for such measurements: the systems are moderately inclined to the line-of-sight to offer some 3-D perspective, they have enough carbon monoxide gas and dust for these components to be measured, and the disks display several rings. The rings scatter the light and are needed for the estimation of the small grain vertical heights (the origins of the rings are uncertain, possibly carved out by planets or by a temperature transition that produces ices).

The astronomers find that in two systems the gas and dust out to distances from the star of about one hundred astronomical units are collocated with the same structure, but farther away the dust grains have a smaller vertical height than the CO gas. In the third system the two components have the same shape at all distances. The scientists argue that a gas-to-dust mass ratio larger than 100 (the typical value for the interstellar medium) could explain the behavior of the first two. The team also concludes that the vertical heights of gas and dust are not simply functions of the mass, age, or spectral type of the star, but in future work they hope to clarify the dependencies.

The scientists caution that with only three examples it is premature to generalize their conclusions. They also note that the mechanisms for producing the rings are uncertain and there might have been an unidentified selection effect in these systems. For example, these disks are relatively large, and smaller, more typical ones could behave differently. Not least, the effects of turbulence and dust settling remain uncertain. These first results, however, demonstrate the feasibility of the techniques. Additional observations and modeling should be able to characterize the disks of other systems and trace more details of the planet formation process.

First Detection of the Pre-Biotic Molecule Glycolonitrile in Space