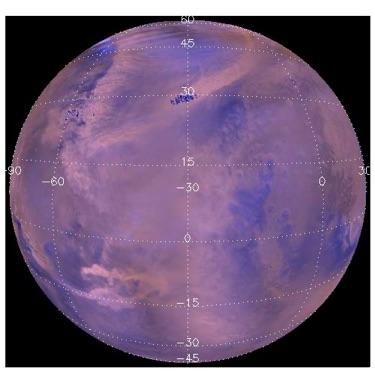 A Mars Global Surveyor image of dust storms in the north in the fall of Mars Year 24. Astronomers have cataloged 14974 Martian dust storms during eight Martian years, and analyzed them to find unique antecedents to major sequences of these storms that can aid in planning future Mars missions.

Dust storms are one of the defining features of the Martian atmosphere. They range from microscale dust devils to global events, and greatly impact the Martian climate through atmospheric changes. Studies of the Martian climate are important for guiding modeling efforts of the expected Martian atmosphere during missions so that spacecraft operations can take them into account during the entry, descent, and landing stages, and then later for surface operations.

Medium to large dust events usually occur in the second half of the Martian year, during northern hemisphere fall and winter, and they grow larger as smaller dust storms aggregate. The Mars Global Surveyor Surveyor and Mars Reconnaissance Orbiter produce daily global maps of Mars. CfA astronomers Michael Battalio and Huiqun Wang have used these images to compile the Mars Dust Activity Database (MDAD), a comprehensive dataset of dust storms over eight Mars years, and used the database to analyze dust storm characteristics.

The scientists analyzed the MDAD to find a total of 14,974 dust storms in this period that were each larger than one hundred thousand square kilometers and could be tracked over multiple Martian days ("sols"). They define a dust storm sequence as a collection of storm members with a coherent trajectory over more than three sols, and find 228 such sequences in the database which they then analyze, finding that the sequences fall into three general types depending on the numbers and sizes of the members. The scientists find 43 sequences that are each larger than ten million square kilometers and define these as major sequences.   Major sequences significantly affect the transmission, thermal structure, and circulation of the Martian atmosphere. They occur over narrower seasonal timeframes than the other storm sequences, and are composed of dust storm members that are individually larger and more persistent than the storms in the other sequences. The authors report other significant conclusions, including in particular that the major sequences have unique antecedents such that during the six preceding sols the dust storm area increases steadily. The MDAD, the most comprehensive catalog of dust activity available, is a valuable new resource for modeling the Martian atmosphere and mission planning.