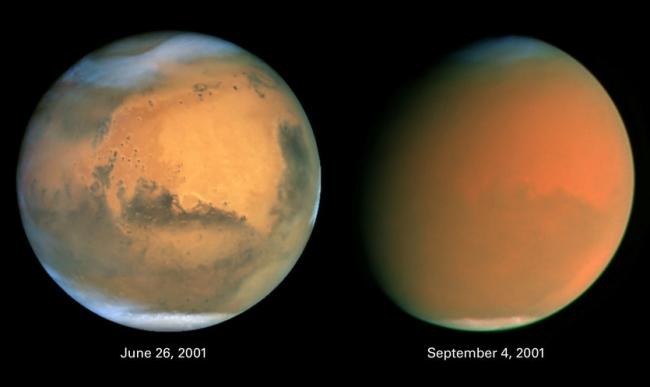 Comparison images of Mars taken by Hubble (left) and showing a global dust storm that engulfed it (right). Astronomers studying dust storms in the Aonia-Solis-Valles Marineris region over eight years have found a distinct periodicity in their occurrence.

Dust is a critical component in the Martian atmosphere. It influences the atmosphere's circulation by heating or cooling it and is in turn redistributed around the planet by atmospheric winds. In this dust cycle, dust storms play a particularly important role. Storms are traditionally classified into local, regional and planet-encircling dust storms, with small, local storms occurring throughout the year but global storms being most active during the northern fall and winter seasons. A dust storm that spreads over a large enough region and that lasts long enough can significantly affect the visibility, thermal structure and atmospheric circulation. Such major dust storms often result from dust storm sequences that follow specific trajectories and display coherent development histories.

CfA astronomers Michael Battalio and Huiqun Wang analyzed eight Martian-year's worth of data on storms in the Aonia-Solis-Valles Marineris region taken from the Mars Daily Global Maps, a set of daily images taken by the Mars Global Surveyor and the Mars Reconnaissance Orbiter instruments. The scientists chose this particular region because it hosts the most important dust storm activity in the Martian southern hemisphere outside of the conventional dust storm season. The astronomers found that the storm sequences could be divided into two groups, confirming a theory that implies dust storms can regenerate and sustain themselves. The first group covered large regions and lasted more than six Martian days, while the second group covered more local regions for shorter times. The scientists also found a distinct periodicity of fifteen to twenty Martian days in the storm activity, perhaps related to a periodicity seen in the Martian southern hemisphere’s energy transport mechanisms. They note that the Earth’s southern hemisphere has a twenty-five day oscillation. The astronomers conclude by noting that these results may provide insight into the inter-seasonal variability of dust activity on Mars, and call for further studies to compare with the Earth's corresponding mechanisms.