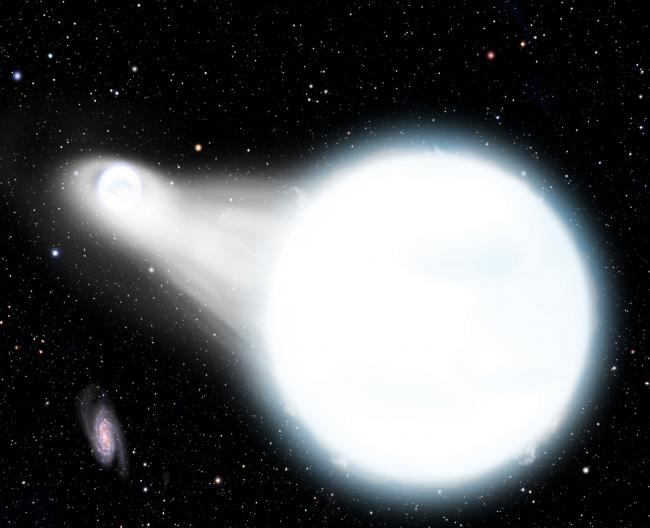 White dwarfs are the burned-out cores of stars like our Sun. Astronomers have discovered a pair of white dwarfs spiraling into one another at breakneck speeds. Today, these white dwarfs are so near they make a complete orbit in just 13 minutes, but they are gradually slipping closer together. About 900,000 years from now - a blink of an eye in astronomical time - they will merge and possibly explode as a supernova. By watching the stars converge, scientists will test both Einstein's general theory of relativity and the origin of some peculiar supernovae.

The two white dwarfs are circling at a bracing speed of 370 miles per second (600 km/s), or 180 times faster than the fastest jet on Earth.

"I nearly fell out of my chair at the telescope when I saw one star change its speed by a staggering 750 miles per second in just a few minutes," said Smithsonian astronomer Warren Brown, lead author of the paper reporting the find.

The brighter white dwarf contains about a quarter of the Sun's mass compacted into a Neptune-sized ball, while its companion has more than half the mass of the Sun and is Earth-sized. A penny made of this white dwarf's material would weigh about 1,000 pounds on Earth.

Their mutual gravitational pull is so strong that it deforms the lower-mass star by three percent. If the Earth bulged by the same amount, we would have tides 120 miles high.

The discovery team has been hunting for pairs of white dwarfs using the MMT telescope at the Whipple Observatory on Mt. Hopkins, Arizona. These star pairs are too close together to distinguish photographically. By looking at the spectra, however, Brown and his team were able to differentiate the two stars and measure their relative motions. These stars are also oriented such that they eclipse each other every 6 minutes.

"If there were aliens living on a planet around this star system, they would see one of their two suns disappear every 6 minutes - a fantastic light show." said Smithsonian astronomer and co-author Mukremin Kilic.

These eclipses provide a very accurate clock, which is extremely useful for measuring any changes in the system.

General relativity predicts that moving objects will create ripples in the fabric of space-time, called gravitational waves. These waves carry away energy, causing the stars to inch closer together and orbit each other faster and faster.

"Though we have not yet directly measured gravitational waves with modern instruments, we can test their existence by measuring the change in the separation of these two stars," said co-author J. J. Hermes, a graduate student at the University of Texas at Austin. "Because they don't seem to be exchanging mass, this system is an exceptionally clean laboratory to perform such a test."

The team expects to conduct this test in a few months, when the star pair emerges from behind the Sun as seen from Earth.

Some models predict merging white dwarf pairs such as these are the source of a rare class of unusually faint stellar explosions called underluminous supernovae.

"If these systems are responsible for underluminous supernovae, we will detect these binary white dwarf systems with the same frequency that we see the supernovae. Our survey isn't complete, but so far, the numbers agree," said Brown.

This work will provide an important observational test on theories of white dwarf mergers, which are thought to produce many kinds of supernovae, not just the underluminous type.