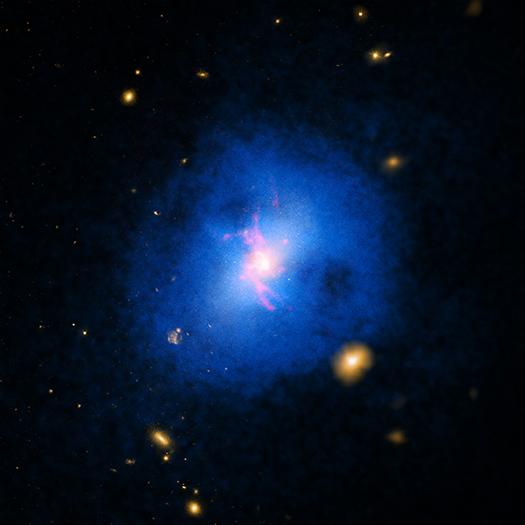 An image of the bright cluster galaxy Abell 2597 in the X-ray (blue), hydrogen line emission (red), and optical (yellow). Astronomers using multi-wavelength observations from the millimeter to the X-ray have concluded, in agreement with predictions, that this galaxy is both accreting gas from its surroundings and ejecting material out from its supermasssive black hole, thus acting like a cosmic fountain.

Most galaxies lie in clusters containing from a few to thousands of other galaxies. Our Milky Way, for example, belongs to the Local Group cluster of about fifty galaxies whose other large member, the Andromeda galaxy, is about 2.3 million light-years away. Clusters are the most massive gravitationally bound objects in the universe and form (according to current ideas) in a "bottoms-up" fashion with smaller structures developing first and with dark matter playing an important role. Exactly how they grow and evolve, however, depends on several competing physical processes including the behavior of the hot intracluster gas.

The galaxy Abell 2597 lies near the center of a cluster about one billion light-years away in the midst of a hot nebula (tens of millions of degrees) of cluster gas. Astronomers have long theorized that intergalactic matter like the plasma around Abell 2597 can fall onto galaxies, cool, and provide fresh material for the galaxy's star formation. They have, however, also discovered the opposite activity: galaxies’ central supermassive black holes are ejecting jets of material back out into the hot intracluster medium. CfA astronomers Grant Tremblay, Paul Nulsen, Esra Bulbul, Laurence David, Bill Forman, Christine Jones, Ralph Kraft, Scott Randall, and John ZuHone led a large team of colleagues studying the behavior of the hot gas and these competing processes in Abell 2597 using a wide range of observations including new and archival ALMA millimeter observations, optical spectroscopy, and deep Chandra X-Ray Observatory images.

The sensitive and wide-ranging datasets enabled the scientists to probe the thermodynamic character and motions of the hot gas (including both infall and outflow streams), the cold, star forming dust clouds in the galaxy, and the relative spatial arrangement of all these ingredients. They find detailed support for the models, including both infall of hot material into the galaxy and its subsequent conversion into new stars and as well the outflow of gas driven by jets from the central supermassive black hole. They show that the warm and cold material are actually found together in this galaxy (although they are of different densities), with clouds of cold gas likely feeding the black hole and apparently coupling to the powerful jets ejected from the nucleus. The result is that the molecular and ionized nebula at the heart of Abell 2597 is what they term a galaxy-scale "fountain:" cold gas drains into the reservoir created by the presence of the black hole at the center, and this powers outflowing jets that, in turn, later cool and sink, raining back down. Because the outflowing material does not move quickly enough to escape the galaxy's gravity, they conclude that this dramatic galactic fountain seems likely to be long-lived. It may also be a common occurrence in these massive clusters, helping to explain the cosmic evolution of galaxies.

Gamma-Ray Blazars in the Sky

Chandra Detection of a Circumnuclear Torus