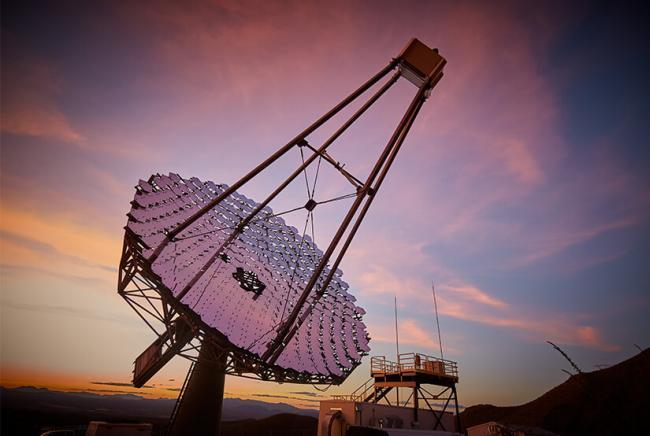 One of the four 12-meter telescopes comprising the VERITAS gamma-ray observatory. VERITAS is located at SAO's Fred Lawrence Whipple Observatory in Arizona. Astronomers using the gamma-ray telescopes VERITAS, HESS and MAGIC, combined with X-ray results, have found that the gamma-ray emission from the source HESS J0632+057 varies periodically and arises in a binary system.

Gamma-rays are the most energetic known form of electromagnetic radiation, with each gamma-ray being at least one hundred thousand times more energetic than an optical light photon. Very high energy (VHE) gamma-rays pack energies a billion times this amount, or even more. Astronomers think that VHE gamma-rays are produced in the environment of the winds or jets of the compact, ultra-dense remnant ashes of massive stars left behind from supernova explosions. There are two kinds of compact remnants: black holes and neutron stars (stars made up predominantly of neutrons, with densities equivalent to the mass of the Sun packed into a volume about 10 kilometers in radius). The winds or jets from the environments of such objects can accelerate charged particles to very close to the speed of light, and radiation that scatters off such energetic particles can becomer energized as well, sometimes turning into VHE gamma-rays.

Nine known or suspected gamma-ray sources are in binary systems, compact objects orbiting a star with periodic releases of energy. Every member of this class has its own unique characteristics but in all but one case it is known that the stellar component is a massive hot star, often surrounded by an equatorial disk. In contrast, the nature of the compact objects in these binary systems is usually not known. The gamma-ray binary HESS J0632+057, located about five thousand light-years away in our galaxy, is coincident with the hot optical star MWC 148 and an associated X-ray source. In 2007, HESS (The High Energy Stereoscopic System) discovered that this source emitted gamma-rays, but in 2009 VERITAS (the Very Energetic Radiation Imaging Telescope Array System, located at the SAO's Fred L. Whipple Observatory in Arizona) could not detect it and set a limit that showed the source was variable at gamma-ray energies. Then in 2009, VERITAS and the MAGIC gamma-ray telescopes detected the source with enhanced emission. Around the same time observations taken with the Swift-XRT mission found that the source had a period in X-ray emission of about 321 days, establishing the binary nature of the object; radio observations found it had a jet a few astronomical units in length.

CfA astronomer Wystan Benbow and a large international team probed the nature of the compact object in this binary system. They completed an analysis of fifteen years of gamma-ray observations, as well as X-ray observations from a number of facilities. For the first time they were able to determine the orbital period in VHE emission, 316.7 days with an uncertainty of about 1.4%, and consistent with the period measured at other wavelengths. The strong correlation between the X-ray and gamma-ray behaviors suggests that a single population of rapidly moving charged particles is responsible for both, while the absence of a correlation with emission lines of atomic hydrogen implies that any variations in the hot star play a negligible role. The astronomers now are planning deeper, multi-year simultaneous multiwavelength observations to further characterize the emission and the source structure.