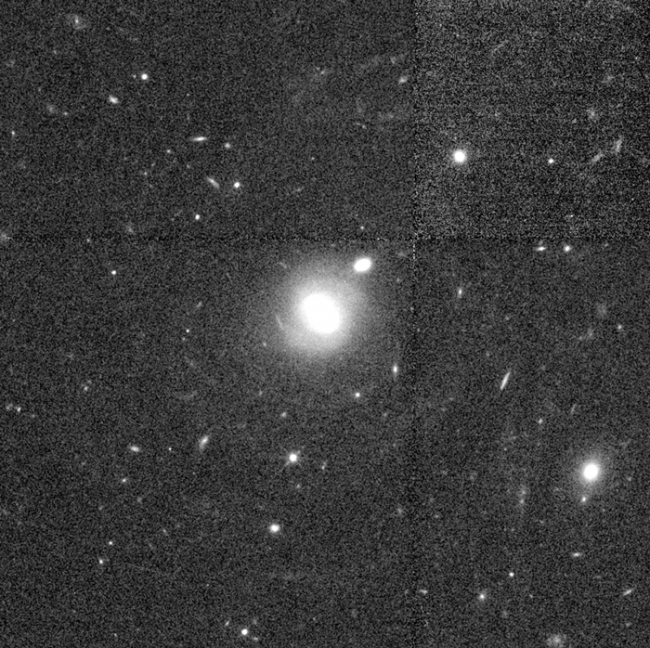 Forty years ago astronomers using sensitive new imaging techniques discovered a class of large, faint galaxies they named low surface brightness galaxies. Giant low surface brightness galaxies (gLSBGs) are a subset whose masses are comparable to the Milky Way’s but whose radii are ten times bigger, as much as four hundred thousand light-years. These gLSBGs raise a problem for astronomers: despite being massive, the galaxy disks are (kinematically speaking) relatively inactive. The usual formation paradigm for high mass galaxies imagines them evolving out of galaxy mergers, a process that stirs up the disk and should make it kinematically active. Moreover, most gLSBGs are found with no other galaxies in their vicinities suggesting that collisions were probably not important in their formation.

The question of how gLSBGs form is a matter of active debate. Two popular models have been proposed. In the first, the non-catastrophic scenario, slow gas accretion onto the galaxy leads to its growth. In the alternative, the catastrophic scenario, a merger event did occur in the past; the major advantage of this model is that it fits within the current galaxy formation framework. CfA astronomer Igor Chilingarian and his colleagues have completed sensitive optical observations of seven gLSBGs, taking spectra across the full diameters of these faint, giant systems, and combining their results with archival optical and radio measurement of atomic hydrogen emission. Their new paper is the latest in a series of results on gLSBGs.

The astronomers used the large dataset to test these two scenarios; they also considered a third option in which the galaxies form within an unusually shallow dark matter halo and its gravitational influence. (All galaxies are thought to have dark matter haloes; the Milky Way's halo contains ten times more mass than is present in stars.) They conclude that all three scenarios appear to be operating but in different situations. For most of their sample, the most likely process was formation by growth through gradual accretion after initial galaxy formation. For remaining gLSBGs, the major merger scenario explained the observations better, although in a few cases they found that a sparse dark matter halo could also play a role. The scientists also discovered that at least six of their seven gLSBGs host active galactic nuclei (AGN), however their supermassive black hole nuclei are much less massive than those in normal galaxies of similar mass, implying that mergers, even if they were involved in forming gLSBGs, must have been comparatively modest.