Astronomers using the Hubble Space Telescope have recorded a star’s final moments in detail as it gets gobbled up by a black hole. 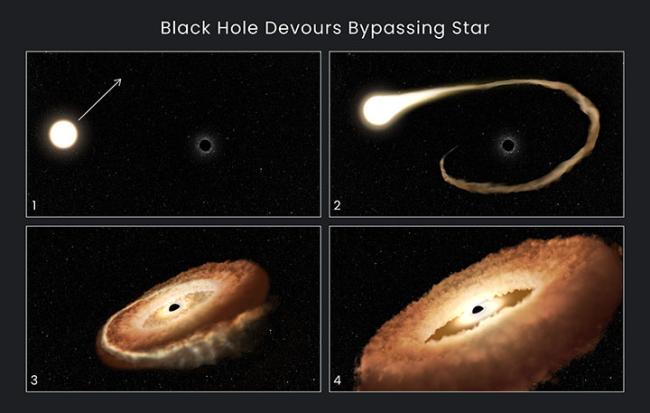 Seattle, WA – Black holes are gatherers, not hunters. They lie in wait until a hapless star wanders by. When the star gets close enough, the black hole's gravitational grasp violently rips it apart and sloppily devours its gasses while belching out intense radiation.

Astronomers using NASA's Hubble Space Telescope have recorded a star's final moments in detail as it gets gobbled up by a black hole.

These are termed "tidal disruption events." But the wording belies the complex, raw violence of a black hole encounter. There is a balance between the black hole's gravity pulling in star stuff, and radiation blowing material out. In other words, black holes are messy eaters. Astronomers are using Hubble to find out the details of what happens when a wayward star plunges into the gravitational abyss.

Hubble can't photograph the AT2022dsb tidal event's mayhem up close, since the munched-up star is nearly 300 million light-years away at the core of the galaxy ESO 583-G004. But astronomers used Hubble’s powerful ultraviolet sensitivity to study the light from the shredded star, which includes hydrogen, carbon, and more. The spectroscopy provides forensic clues to the black hole homicide.

About 100 tidal disruption events around black holes have been detected by astronomers using various telescopes. NASA recently reported that several of its high-energy space observatories spotted another black hole tidal disruption event on March 1, 2021, and it happened in another galaxy. Unlike Hubble observations, data was collected in X-ray light from an extremely hot corona around the black hole that formed after the star was already torn apart.

"However, there are still very few tidal events that are observed in ultraviolet light given the observing time. This is really unfortunate because there's a lot of information that you can get from the ultraviolet spectra," says Emily Engelthaler, an intern at the Center for Astrophysics | Harvard & Smithsonian (CfA) in Cambridge, Massachusetts. "We're excited because we can get these details about what the debris is doing. The tidal event can tell us a lot about a black hole." Changes in the doomed star's condition are taking place on the order of days or months.

For any given galaxy with a quiescent supermassive black hole at the center, it's estimated that the stellar shredding happens only a few times in every 100,000 years.

This AT2022dsb stellar snacking event was first caught on March 1, 2022 by the All-Sky Automated Survey for Supernovae (ASAS-SN or "Assassin"), a network of ground-based telescopes that surveys the extragalactic sky roughly once a week for violent, variable, and transient events that are shaping our universe. This energetic collision was close enough to Earth and bright enough for the Hubble astronomers to do ultraviolet spectroscopy over a longer than normal period of time.

"Typically, these events are hard to observe. You get maybe a few observations at the beginning of the disruption when it's really bright. Our program is different in that it is designed to look at a few tidal events over a year to see what happens," says Peter Maksym of the CfA. "We saw this early enough that we could observe it at these very intense black hole accretion stages. We saw the accretion rate drop as it turned to a trickle over time."

The UV light seen by Hubble is interpreted as coming from a very bright, hot, donut-shaped volume of gas that was once the star. It is about the size of our solar system and is swirling around a black hole in the middle.

"We're looking somewhere on the edge of that donut. We're seeing a stellar wind from the black hole sweeping over the surface that's being projected towards us at speeds of 20 million miles per hour (three percent the speed of light)," says Maksym. "We really are still getting our heads around the event. You shred the star and then it's got this material that's making its way into the black hole. And so you've got models where you think you know what is going on, and then you've got what you actually see. This is an exciting place for scientists to be: right at the interface of the known and the unknown.

The results were reported today at the 241st meeting of the American Astronomical Society in Seattle, Washington.

About the Hubble Space Telescope

The Hubble Space Telescope is a project of international cooperation between NASA and ESA. NASA's Goddard Space Flight Center in Greenbelt, Maryland, manages the telescope. The Space Telescope Science Institute (STScI) in Baltimore, Maryland, conducts Hubble and Webb science operations. STScI is operated for NASA by the Association of Universities for Research in Astronomy, in Washington, D.C.