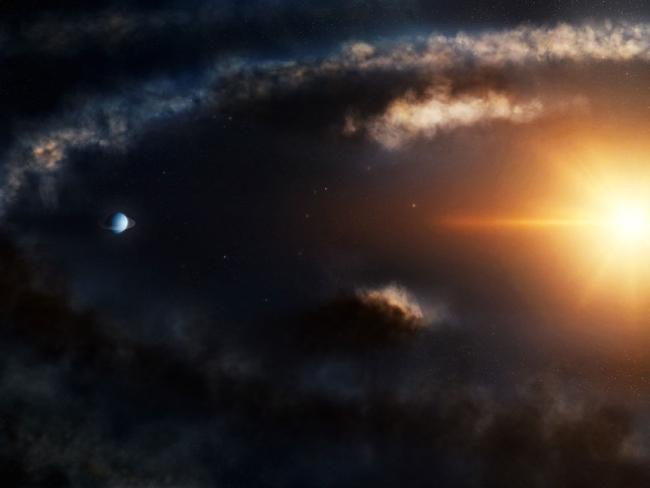 Cambridge, MA – Astronomers agree that planets are born in protoplanetary disks — rings of dust and gas that surround young, newborn stars. While hundreds of these disks have been spotted throughout the universe, observations of actual planetary birth and formation have proved difficult within these environments.

Now, astronomers at the Center for Astrophysics | Harvard & Smithsonian have developed a new way to detect these elusive newborn planets — and with it, "smoking gun" evidence of a small Neptune or Saturn-like planet lurking in a disk. The results are described today in The Astrophysical Journal Letters.

"Directly detecting young planets is very challenging and has so far only been successful in one or two cases," says Feng Long, a postdoctoral fellow at the Center for Astrophysics who led the new study. "The planets are always too faint for us to see because they’re embedded in thick layers of gas and dust."

Scientists instead must hunt for clues to infer a planet is developing beneath the dust.

"In the past few years, we've seen many structures pop up on disks that we think are caused by a planet's presence, but it could be caused by something else, too" Long says. "We need new techniques to look at and support that a planet is there."

For her study, Long decided to re-examine a protoplanetary disk known as LkCa 15. Located 518 light years away, the disk sits in the Taurus constellation on the sky. Scientists previously reported evidence for planet formation in the disk using observations with the ALMA Observatory.

Long dove into new high-resolution ALMA data on LkCa 15, obtained primarily in 2019, and discovered two faint features that had not previously been detected.

About 42 astronomical units out from the star — or 42 times the distance Earth is from the Sun — Long discovered a dusty ring with two separate and bright bunches of material orbiting within it. The material took the shape of a small clump and a larger arc, and were separated by 120 degrees.

Long examined the scenario with computer models to figure out what was causing the buildup of material and learned that their size and locations matched the model for the presence of a planet.

"This arc and clump are separated by about 120 degrees," she says. "That degree of separation doesn’t just happen — it’s important mathematically."

Long points to positions in space known as Lagrange points, where two bodies in motion — such as a star and orbiting planet — produce enhanced regions of attraction around them where matter may accumulate.

"We're seeing that this material is not just floating around freely, it's stable and has a preference where it wants to be located based on physics and the objects involved," Long explains.

In this case, the arc and clump of material Long detected are located at the L4 and L5 Lagrange points. Hidden 60 degrees between them is a small planet causing the accumulation of dust at points L4 and L5.

The results show the planet is roughly the size of Neptune or Saturn, and around one to three million years old. (That's relatively young when it comes to planets.)

Directly imaging the small, newborn planet may not be possible any time soon due to technology constraints, but Long believes further ALMA observations of LkCa 15 can provide additional evidence supporting her planetary discovery.

She also hopes her new approach for detecting planets — with material preferentially accumulating at Lagrange points — will be utilized in the future by astronomers.

"I do hope this method can be widely adopted in the future," she says. "The only caveat is that this requires very deep data as the signal is weak."

Long recently completed her postdoctoral fellowship at the Center for Astrophysics and will join the University of Arizona as a NASA Hubble Fellow this September.