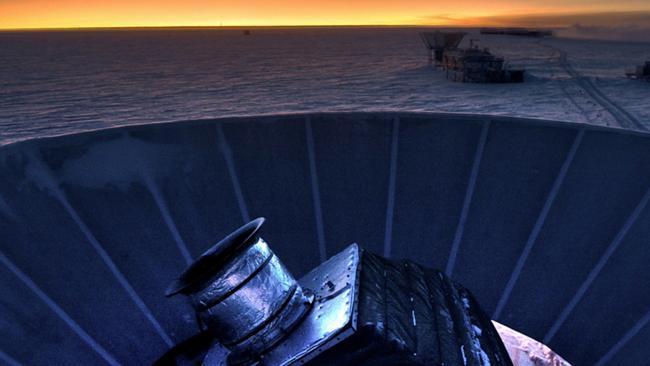 The BICEP3 telescope located at the Amundsen-Scott South Pole Station in Antarctica. (The metal skirt around the telescope shields it from reflected light from the surrounding ice.) New results analyzing BICEP3 data together with earlier data and the datasets from space missions have improved previous constraints on the kinds of models of inflation that could describe the earliest moments of the universe.

The universe was created about 13.8 billion years ago in a blaze of light: the big bang. Roughly 380,000 years later, after matter (mostly hydrogen) had cooled enough for neutral atoms to form, light was able to traverse space freely. That light, the cosmic microwave background (CMB) radiation, comes to us from every direction in the sky uniformly ... or so it first seemed. In the last decades astronomers have discovered that the radiation has faint ripples and bumps in it at a level of brightness of only a part in one hundred thousand – the seeds for future structures, like galaxies.

Astronomers have conjectured that these ripples also contain traces of an initial burst of expansion -- the so-called inflation – which swelled the new universe by thirty-three orders of magnitude in a mere ten-to-the-power-minus-33 seconds. Clues about the inflation should be faintly present in the way the cosmic ripples are curled, an effect due to gravitational waves in cosmic infancy that is expected to be perhaps one hundred times or more fainter than the ripples themselves.

The curling effect produces patterns in the light known as "B-mode polarization," and it is expected to be exceedingly faint. Other exotic processes are at work in the universe to make this daunting measurement even more challenging. The principal one is the faint glow of light from dust particles in our galaxy that have been aligned by magnetic fields. This light is also polarized and can be twisted by magnetic fields to produce B-mode polarization patterns. Radio waves from our galaxy can produce similar effects. About six years ago, CfA astronomers working at the South Pole reported the first evidence for such curling, "B-mode polarization," at levels consistent with simple models of inflation, but subsequent measurements at different frequencies (or colors) of microwave light revealed the signal to be explainable by galactic dust.

In the years since those first measurements of B-mode polarization astronomers have continued their meticulous observations, adding powerful data from new telescopes at many different frequencies operating at the South Pole. CfA astronomers D. Barkats, H. Boenish, J. Connors, J. Cornelison, M. Dierickx, M. Eiben, D.C. Goldfinger, P. Grimes, S. Harrison, K.S. Karkare, J. M. Kovac, B. Racine, S. Richter, B.L. Schmitt, T. St. Germaine, C. Verges, C.L. Wong, L. Zeng and a large team of colleagues have just completed an analysis of all the data from the South Pole experiments BICEP2, Keck Array, and BICEP3 through 2018, and correlate the results with results from the CMB space missions Planck and WMAP. (Although data collection for those missions ended in 2013 and 2010, respectively, the data processing continues and the scientists used the 2018 release.) The new results improve the previous best constraints on curling by about a factor of two, and now provide powerful guidance on the kinds of models of inflation that could describe the earliest moments of the universe.

A broad class of simple models is now largely ruled out. The team reports that the most favored of the remaining class of models predict primordial gravitational waves at levels that should be detected (or ruled out) within the next decade with upgraded telescopes at the South Pole. The team is already in the process of upgrading the BICEP system and expects to gain another factor of about three improvements within five years, enough to set tight constraints to inflationary models.

Scientists "Zoom In" On Dark Matter, Revealing the Invisible Skeleton of the Universe

Measuring the Age of the Universe

Astronomers Identify Some of the Earliest Galaxies in the Universe

Does Some Dark Matter Carry an Electric Charge?

Is Dark Matter Made of Primordial Black Holes?

A New Bound on Axions

Harvard University Department of Astronomy, Institute for Theory and Computation
The Big Bang theory of cosmology successfully describes the 13.7 billion years of evolutionary history of our Universe. However, it is known that the origin of the Big Bang is incomplete. We are interested in finding out what caused the Big Bang, and the physics involved in this primordial epoch. We study physics, build models and propose observables for the primordial universe using quantum field theory, general relativity and/or string theory, and test them with data from astrophysical observations.
3