Astrophysicist specializing in galaxy formation and evolution will take the helm of the prestigious research collaboration between Harvard and the Smithsonian. 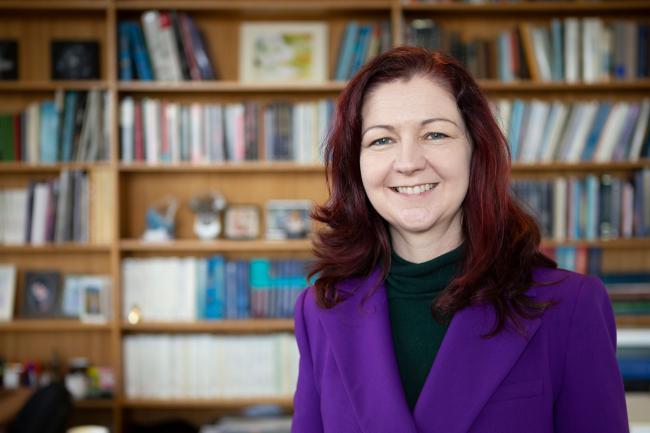 Cambridge, MA -- Lisa J. Kewley has been named the Director of the Center for Astrophysics | Harvard & Smithsonian (CfA), effective July 1, 2022. A world leader in the theoretical modeling and observation of star-forming and active galaxies, Kewley brings 20 years of experience in astrophysics to the role.

Kewley currently serves as the director of ASTRO 3D, a $40-million Australian Research Council Center of Excellence that seeks to understand the evolution of matter, light and the elements, from the Big Bang to the present day. As director, Kewley oversaw 270 members from 19 national and international partner organizations. She is committed to equity in the workplace, and recently achieved a 50:50 gender balance amongst ASTRO 3D staff through a suite of recruitment and retention initiatives. She also is a professor of astronomy and astrophysics at the Australian National University and an Australian Research Council Laureate Fellow.

As director of the Center for Astrophysics, Kewley will oversee about 800 Harvard and Smithsonian staff, in eight scientific divisions across CfA's nine major scientific facilities and institutes, which include the Fred Lawrence Whipple Observatory in Arizona, the Submillimeter Array in Hawaii, and the Chandra X-Ray Center in Massachusetts.

"For decades, the Center for Astrophysics has given the world profound insights into the cosmos," said Lonnie Bunch, Secretary of the Smithsonian. "It is exciting to welcome Dr. Kewley back to the site of her first fellowship, where the Smithsonian can once again benefit from her leadership and brilliance as we seek to understand the fundamental nature of the universe."

Kewley is a world leader in the theoretical modeling and observation of star-forming and active galaxies. Her seminal contributions include understanding the gas physics in star-forming galaxies, investigating galaxies containing actively accreting supermassive black holes and tracing the star-formation and oxygen history of galaxies over the past 12 billion years.

"Professor Kewley's appointment is a source of excitement for the Center for Astrophysics, the Harvard College Observatory, the Department of Astronomy and the broader Smithsonian and Harvard communities," said Claudine Gay, Edgerley Family Dean of the Faculty of Arts and Sciences at Harvard. "A versatile and visionary scientist, a dedicated and inspiring teacher and mentor and an exemplary colleague, community builder and institutional citizen, Kewley will undoubtedly build Astronomy and Astrophysics at Harvard to further strength and distinction and provide an even more important resource for scientific inquiry. We are truly delighted that she is joining our academic community."

Prior to joining ASTRO 3D, Kewley served as the associate director of the Research School of Astronomy and Astrophysics at ANU from 2012-2016, where she oversaw 17 staff and 35 graduate students. She also served as an assistant and associate professor at the University of Hawaii.

Among her many accolades, Kewley is a recipient of the James Craig Watson Medal, the Annie Jump Cannon Award in Astronomy and the Newton Lacy Pierce Prize in Astronomy. She holds a Bachelor of Science from Adelaide University and a doctorate degree in astrophysics from the Australian National University.

"It is an honor to become director of the CfA," said Lisa Kewley. "The CfA is a tremendously exciting organization with expertise across the entire spectrum from millimeter and radio waves to X-rays. I plan to bring people together from across these different areas to answer some of astronomy's biggest questions, and at the same time, ensuring a positive and supportive environment for all CfA members."

Headquartered at Harvard University, the Center for Astrophysics | Harvard & Smithsonian is a fusion of Harvard and Smithsonian scientists who are tackling humanity's greatest questions about the universe. Established in 1973, the center combines the resources, research facilities and scientific staff between the Harvard College Observatory (HCO) and the Smithsonian Astrophysical Observatory (SAO) under a single director. The SAO is a bureau of the Smithsonian Institution, founded in 1890. The HCO, founded in 1839, is a research institution of Harvard’s Faculty of Arts and Sciences division. The CfA has research facilities across the U.S. and around the world.