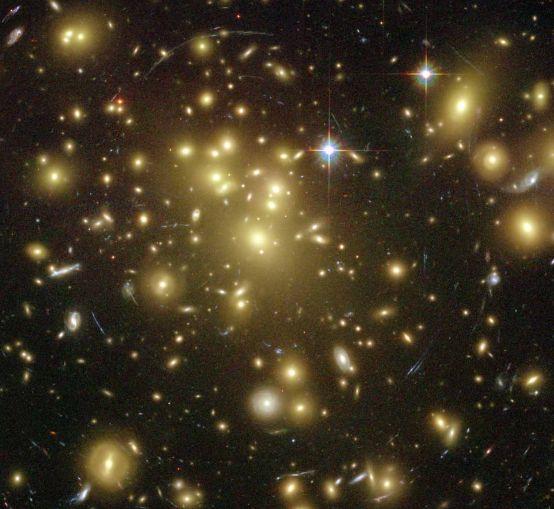 Galaxy clusters are unique laboratories for the study of large-scale magnetic fields. The turbulent intracluster medium is permeated by a ubiquitous magnetic field on scales ranging from few to hundreds of light-years. These fields have been detected, but their precise strengths, structures, and connections to the motions of the galaxies in the clusters are poorly known. In merging galaxy clusters, these magnetic fields are studied via the radio emission that is detected in the form of radio haloes around the galaxies or as emission sources in galaxies' outskirts. Astronomers think that these radio structures arise in processes associated with the formation history of the cluster, in particular mergers. These events induce both shock waves and turbulence which are thought to give rise to the radio halo and sources.

The mechanisms that accelerate the charged particles that, as they swing around the magnetic fields, produce the radio emission are not clear -- but they must be dramatic since they have to accelerate the particles to speeds close to that of light in order to produce the radio emission seen. CfA astronomer Lorenzo Lovisari and his colleagues investigated the intracluster magnetic field in the Abell 2345 galaxy cluster, one of the brightest X-ray clusters known with over one hundred members. The scientists combined observations of polarized radio emission using the Jansky Very Large Array with 3-D cosmological simulations of cluster formation combined with X-ray results to constrain the magnetic field properties. The astronomers were able to estimate the magnetic field distribution as well as the density of electrons in the plasma. They find that the magnetic field is not in equilibrium with the hot gas, something that had not been expected and signals that the turbulence is more complex than had been imagined. This is the first time this combination of techniques has been successfully applied to a cluster, and the scientists note that a larger sample of clusters needs to be studied before more definitive conclusions about intracluster magnetic fields can be reached.