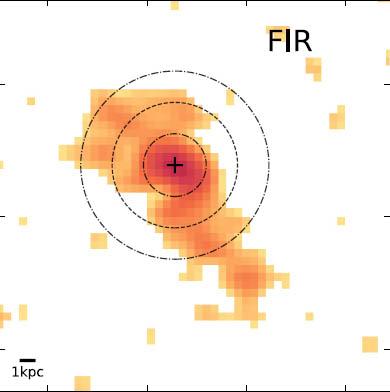 A far infrared (FIR) image of an ultraluminous galaxy from the epoch about three billion years after the big bang. The cross marks the location of the peak emission (also the peak of radio emission); the concentric rings mark distances of 2, 4, and 6 kiloparsecs (one kiloparsec is 3.3 light-years).  Astronomers use multiwavelength images of the galaxy to derive properties of its complex, massive star formation activity.

The most luminous galaxies in the universe radiate a thousand times the energy of the Milky Way (or even more), most of it at infrared wavelengths. These galaxies are powered by the ultraviolet radiation from bursts of new stars or from active galactic nuclei; the UV heats dust which then re-radiates the energy in the infrared. A few billion years after the big bang, galaxies in the universe were undergoing a peak of star formation activity with star-formation rates sometimes exceeding a thousand solar-masses per year (the Milky Way produces about one star per year). Most of their energy is emitted in the infrared, although because of the expansion of the universe the observed peak of their emission is redshifted into the submillimeter band and they are known as dusty, star-forming submillimeter galaxies.

These cosmically early objects are far away and difficult to detect, but some of the most luminous ones have been spotted in deep surveys. The processes powering their emission reflect the physical conditions in the early universe; moreover, the objects are the ancestors of galaxies today. Astronomers are therefore working hard to answer some fundamental questions, in particular whether their star formation mechanisms are similar to those in the Milky Way, and if not, how and why they differ. Because they are so far away their spatial structures are difficult to discern, and because they are so dusty, optical wavelengths do not penetrate the obscuration.

CfA astronomer Rachel Cochrane led a team that obtained and analyzed multi-wavelength data on a dusty- star forming galaxy from the epoch about three billion years after the big bang. They used the SINFONI instrument on the Very Large Telescope to observe near infrared emission from atomic hydrogen, Hubble to study its ultraviolet, the ALMA array to map the submillimeter emission, combined with radio emission data from the Jansky Very Large Array. These four bands are well-known for being tracers of star formation, and the observations were able to resolve relatively small structures -- only about a few thousand light-years in size, fine enough to probe the galaxy and its circumnuclear region. The new results are among the most dramatic findings from combining the power of these four advanced facilities.

The astronomers found that the galaxy has been actively forming stars for about two hundred million years, but it is so dusty that the exact rate is uncertain. With no corrections for obscuration the estimated rate is between about 10-30 solar-masses per year but, depending on the dust distribution, it is more likely to be about 1000 solar-masses per year, a value that is more consistent with the total energetics; there is no evidence for an active galactic nucleus. The images reveal an extended disk structure and striking, extended regions of atomic hydrogen and warm dust that echo the conclusion that the star formation is heavily but irregularly obscured. The results highlight the complexity of star formation activity in these early galaxies and the need for multi-wavelength observations.