Meet the Director: A Q&A with Lisa Kewley

Center for Astrophysics' new director shares strategies for a new era in astronomy, growing up with a love for space, and challenges for women in the field. 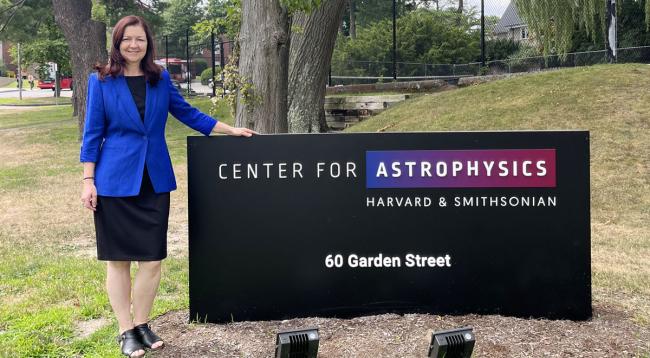 Lisa Kewley assumed her new role as director of the Center for Astrophysics | Harvard & Smithsonian, diving headfirst into the job, which involves overseeing some 800 Harvard and Smithsonian scientists, engineers, students and staff — all who are working towards answering humanity’s greatest questions about the universe. Kewley spoke with Nadia Whitehead for the Harvard Gazette about her life, love of astronomy and plans for the center.

Q: Where did you grow up?
A: I grew up in south Australia in a town called Tea Tree Gully. It's in the suburbs near the Adelaide hills, which is a wine region. It has beautiful white and pink tea trees.

Q: Did you always want to be an astronomer?
A: I started wanting to be an astronomer when I was in high school. I was in a bookstore and I picked up a book called "Galaxies." It had pictures from the Hubble Space Telescope; I thought they were beautiful and wanted to know all about them. I had a physics teacher who loved astronomy and I told him I was interested in being an astronomer and he brought me many public articles about black holes, worm holes. I thought it was great stuff. He also recommended books to read at my level.

One thing that really helped was when our physics class went on an astronomy camp in the Flinders Ranges in South Australia for a week. It was all about scientific experiments. We had a telescope and we tracked Jupiter, looked at Saturn's rings, built our own sun dials and tested them. It was such a great experience and that really did it for me.

Q: What's your vision for the Center for Astrophysics?
A: We are entering a fabulous time in astronomy for large telescopes; the first generation has just come online — the JWST, which will be followed by the NASA Nancy Grace Roman Telescope. And we've got massive ground-based telescopes coming online — the Vera Rubin Observatory, the next generation Event Horizon Telescope, the Giant Magellan Telescope and ESO’s Extremely Large Telescope.

Every time we have a major leap in telescope size in the past, there's been tremendous discoveries about our understanding of the universe and our place in it. So I expect when every single one of these comes online, there will be amazing discoveries again.

We here have an incredible selection of scientists and engineers working towards these and other telescopes. We have expertise covering the whole range of major fields in astronomy as well as all the different wavelengths from radio to x-rays, and we’re starting to branch out into climate science with the upcoming launch of the two satellites TEMPO and MethaneSAT.

We really need to position ourselves to take advantage of these next-generation facilities. So that means strategic hiring in core science areas that are going to be making those discoveries and then inspiring the center to work together to answer astronomy’s biggest questions across divisions and areas where we’ve traditionally been working separately.

Q: So more collaboration between Harvard and the Smithsonian?
A: Yes, Harvard and Smithsonian, but also across different wavelength boundaries so, for example, radio working with optical, or radio, x-ray, optical and infrared astronomers working together. We need to use a wide variety of telescopes to answer the biggest questions in astronomy.

Q: What do you see as strengths of our center and where do you see work to be done?
A: There's tremendous expertise across many areas. We are experts in both space and ground-based astronomy. We have a really fantastic technology and engineering facility. And we don’t just do astronomy, we build the instruments. This makes us tremendously desirable as a builder of telescope technology but also as a user because we’re the experts in the technology and it really helps us take full advantage of the telescopes once they are built.

Like any large organization, there's work to be done in bringing people together and crossing traditional boundaries in science. That's normal for a large organization and that's something I have experience in, in leading a Center of Excellence in Australia that included nine different universities.

Q: What's your research focus? Do you plan to continue conducting research as director?
A: My research focus is in understanding the amount of oxygen in galaxies and how that evolved with time. Recently, I have been doing some theoretical modeling of spectra getting ready for JWST. I am not sure I am going to have a lot of time for research but if I get the time, I’d love to apply our theoretical models to JWST data. I am part of a JWST ERS [early release science] team. I do plan on supervising students.

Q: What made you decide to leave Australia and move to Cambridge?
A: It was a really the excitement of the role; it's a tremendously exciting place. I was here at the CfA as a postdoc and I had a great time. I think it's a fantastic time to be in astronomy leading an organization like the CfA. I want to see the CfA be as successful as it possibly can be.

Q: Tell me about your family. Are they here with you?
A: I've got my family here, my husband and two kids and our two cats. My son is 13 and my daughter is 11 and they are just preparing to go to middle school. We just bought them bikes and scooters.

Q: How would you describe your leadership style?
A: I lead through engagement and bringing people onboard to make changes and answer big questions. It's a fairly consultative leadership style. I like receiving input and feedback from the community. I like to have representation from all areas of the community that I am leading, and I do that through a variety of committees and the representation on committees, as well as through direct communication.

Q: What do you enjoy doing in your free time?
A: I do painting and gardening. I like to grow vegetables and I do watercolor botanical paintings, so paintings of flowers and insects and things like that. I've done a green tree frog, too.

Q: Do you ever paint your cats?
A: I haven't done my cats but we had a baby lamb called Baa-bara and I did paint her. She was so cute.

Q: What's something interesting or unique about you that people would be surprised to know?
A: I have synesthesia. It's where the senses are connected so when I hear sounds, I see random shapes and colors. I have colors for letters and numbers; smells have colors. I thought everyone had it till I was 25 and talked to a psychology student who told me it wasn’t actually that common. It runs in families.

Q: Can you talk a little about some of the important work you have done, and hope to bring to the CfA?
A: In the past, I developed a proposal and vision for center of excellence in Australia that covered multiple universities and a wide variety of science — from the Epoch of Reionization to the present-day Milky Way. It included cross collaborations of observers and theorists. We were able to develop these really successful collaborations across all of these universities through a range of communications as well as bringing people together in individual teams but also overall strategic planning meetings.

In terms of work space, we worked really hard to develop a positive and inclusive culture. We were able to achieve 50 percent women in four years, starting from 37 percent. This was the first time that a center has been able to do that in the physical sciences in Australia.

Q: Do you see the CfA becoming 50 percent female scientists?
A: I've done a lot of work on modeling diversity in organizations. I can’t answer that at this moment because I would need to do the modelling of the CfA to see what’s a realistic timescale to achieve those targets. We need to take into account the different forms of diversity. We really want to have ethnic and cultural diversity as well as people from other underrepresented minority groups. We want to ensure that people feel fully supported regardless of gender, cultural or ethnic background, sexuality, religious beliefs and ability status. This takes time and requires input. It's about consultation and listening and making an action plan to help make our center fully inclusive. Every organization has work to do. Work really never ends in building an inclusive environment.

Q: You are the first woman to hold this role. What does that mean to you?
A: It's a tremendous honor. When I was a student, there weren't any woman professors in my department; there was only one women professor across all of Australia at the time. I fully expected I would hit a glass ceiling at some point and I would have to leave astronomy. So I had a lot of backup plans for when I had to leave.

It wasn't until I moved to the U.S. and came to the CfA as a postdoc [2001] that I saw that there were women here having had successful astronomy careers. There were some women also who had children and were bringing their children to conferences. And I saw that you could be a woman in astronomy and have a family. There were pretty great role models around that changed my whole perspective on astronomy.

I started out not really having much of a long-term goal; I just did astronomy because I really loved it, and then that changed once I came to the CfA. I didn't hit a glass ceiling; you can have a career in astronomy and have children and also, I didn't ever expect to be a director. If you had told me that when I was a student, I would have thought you were crazy. It was more that I started to think of bigger and bigger things to do.

This story originally appeared in the Harvard Gazette.