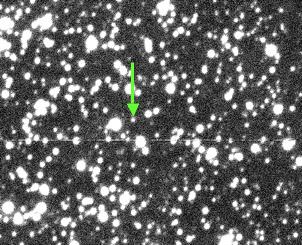 An image of the Neptune Trojan 2008LC18 (identified by green arrow). Astronomers have conducted a new survey of Neptune Trojans, and conclude that they fall into two categories depending on their formation history.

Trojans are small astronomical bodies that orbit the sun in clusters near a planet, situated at two spots preferred by gravity about sixty degrees ahead of or behind the planet in its orbit. Jupiter has about seven thousand known Trojans larger than about one kilometer in diameter (many more are thought to exist), Neptune has twenty-eight, Uranus has two, Mars has nine, and even the Earth has a Trojan discovered a few years ago. (Trojans can also orbit a planet close to a moon, and although Saturn has no known Trojans, two of its moons do.) Thought to be dynamically stable for a billion years, Trojans fall roughly into two categories based on their masses and the details of their orbital motions.

CfA astronomer Mike Alexandersen was a member of a team studying the history and evolution of the Trojans of Neptune. The team discovered four new Neptune Trojans in their Outer Solar System Origins Survey using the Canada-France Hawaii optical telescope, which observed target areas searching for faint, slowly moving objects. They combined their results with observations from the PanSTARRS optical survey and computer simulations, and analyzed the orbital properties and dynamical stability of Neptune's Trojans. The scientists use these results to investigate three proposed formation scenarios for the two categories of Trojans: they formed as two separate components and were captured separately at different times as Neptune migrated away from the sun in its early history; one group formed originally, but then it evolved into the two types seen today; the more stable of the two groups formed as the result of a collision with a passing, large external object. Their study reanalyses and categorizes the entire Trojan population of Neptune and concludes that there should be thousands more undetected Neptune Trojans in a total population that is even larger than Jupiter's. They note that with additional observations they should enable them to distinguish between the three different formation scenarios.