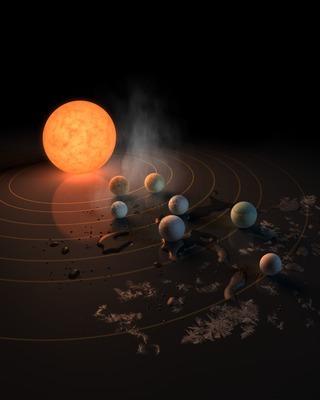 An artist's conception of the seven planets in the TRAPPIST-1 system which orbit the star in an exceptinally flat plane. Astronomers have used the extreme flatness of the system to constrain the properties and evolution of the protoplanetary disk.

The planets of the solar system all orbit the Sun more-or-less in a plane. Compared to the Earth's orbit, which defines the plane at zero degrees, the orbit with the largest angle is Mercury’s whose inclination is 7 degrees (the angle of the orbit of the dwarf planet Pluto is 17. 2 degrees). The orbital characteristics of planets evolve as the protoplanetary disk of gas and dust dissipates, and as the young planets themselves migrate in the disk in response to their mutual gravitational influences and effects of material in the disk. Astronomers recognize therefore that the orbital appearance of a planetary system reflects its evolutionary story.

The planetary system TRAPPIST-1 consists of seven Earth-sized planets orbiting a small star (a mass of only .09 solar-masses) about forty light-years from the Sun. First detected by the TRAPPIST telescopes, follow-up observations with the IRAC camera on Spitzer and the K2 mission, among others, have by now determined the planetary masses to precisions between 5-12% and refined other properties of the system. Remarkably, the system is by far the flattest known: its orbital inclination is only 0.072 degrees. This extreme flatness is potentially a very important constraint on the formation and evolution of the system. The system is also very compact with the most distant of its seven planets orbiting only .06 astronomical units from the star (in our solar system, Mercury orbits more than five times farther away). In such a closely packed configuration the planets’ mutual gravitational attractions will be particularly important influences on details like the orbital inclinations.

CfA astronomers Matthew Heising, Dimitar Sasselov, Lars Hernquist, and Ana Luisa Tió Humphrey used 3-D computer simulation of the gaseous disk and planets to study a range of possible formation models including several that had been suggested in previous studies. Knowing that the gaseous protostellar disk influences the migration properties of the planets, the scientists were also particularly interested in exploring what the minimum disk mass could have been for the TRAPPIST-1 system. They adapted the computer code AREPO, which has been used successfully in the past primarily for cosmological simulations.

The astronomers conclude that, in agreement with some earlier speculation, the seven planets probably formed sequentially, each one initially at a distance from the star where the temperature drops enough for water to freeze, and then migrates inward, accreting slowly on the way and stopping when its orbit is influenced by the presence of the other planets appropriately. Only a modest disk mass is required, about .04 solar-masses, with the models also addressing the distribution of material within the disk, and moreover the astronomers can exclude disk masses more than about fifteen times this value. The new work demonstrates how simulations of planetary systems can be used to infer remarkable details about how they formed and evolved.

Reference: "How Flat Can a Planetary System Get? I. The Case of TRAPPIST-1," Matthew Z. Heising, Dimitar D. Sasselov, Lars Hernquist, and Ana Luisa Tió Humphrey, The Astrophysical Journal 913, 126, 2021.