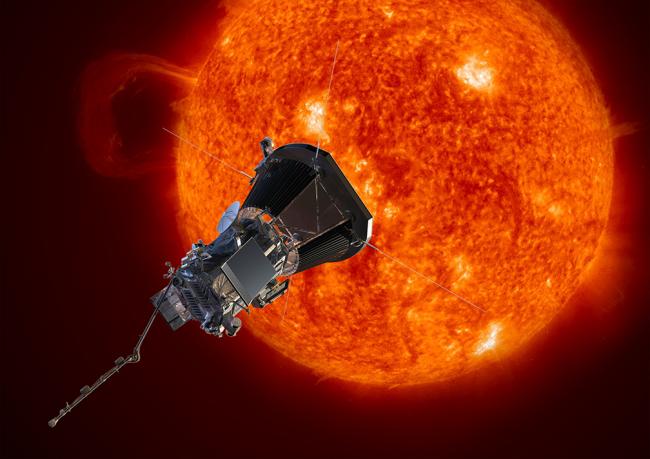 Scientific data taken by the Parker Solar Probe are set to be released to the public on Nov 12. The data files being released contain measurements that were taken closer to the Sun than ever before. These unprecedented data promise to revolutionize our understanding of how the solar corona and solar wind work.

The Parker Solar Probe is a robotic NASA spacecraft that launched in 2018 and is now in orbit around the Sun, making scientific measurements that will increase our understanding of the Sun's outer atmosphere. This outer atmosphere, known as the solar corona, is the portion of the Sun that can be seen during a total solar eclipse, and contains ionized gases that have temperatures up to millions of degrees. The objectives of Parker Solar Probe include investigating how those gases are heated to such extreme temperatures and then accelerated away from the Sun, where they become what's known as the solar wind.

When comparing the Parker Solar Probe measurements to previous observations, the advance is revolutionary. "Parker Solar Probe is a little like the difference between the postcard of a vacation and actually traveling," said Dr. Kelly Korreck, an astrophysicist at the Smithsonian Astrophysical Observatory. "We have been able to take remote photos of the Sun, kind of like getting a postcard of, say, the Grand Canyon. But with Parker Solar Probe, we are going there - like you would go to the Grand Canyon and actually experience what the "terrain" looks like."

One of the primary sets of instruments on Parker Solar Probe is called the Solar Wind Electrons, Alphas, and Protons (SWEAP) investigation, which consists of 4 sensors that measure the speed, density, and temperature of the particles that the spacecraft is flying through. The sensors were designed and built primarily by the Smithsonian Astrophysical Observatory and the University of California, Berkeley’s Space Sciences Lab. Designing the instruments to survive the near-Sun environment while making the necessary measurements was an extreme engineering challenge,

"The SWEAP experiment is a set of extremely sensitive instruments, and we have effectively mounted them to a man-made comet, throwing itself repeatedly and at awesome speed into one of the harshest environments known to man," said Dr. Mike Stevens, an astrophysicist at the Smithsonian Astrophysical Observatory. "Planning for this mission involved bizarre and extreme tests. None of this, however, could fully imitate what Parker Solar Probe is experiencing in the Sun's corona. The only way to ultimately find that out was to go."

But the work didn't stop once the instruments were operating in space. All of the measurements that get recorded on the spacecraft must be processed and prepared so that researchers around the world can make use of them. The instruments record data onto the spacecraft's computer when they are close to the Sun and then those files are downlinked through the Deep-Space Network to scientists on Earth. Scientists must then carefully apply their knowledge of how the instrument works to convert the raw numbers received from the spacecraft into physical units (like velocity, density, and temperature) that the rest of the scientific community will understand.

"It's our job to understand everything about how these instruments have performed in space, and to calibrate them precisely in all of the ways that we could not have when they were on the ground," said Dr. Stevens, "That way, scientists can focus on what the measurements are actually telling us about the Sun and the solar wind."

Parker Solar Probe still has a long way to go. Over the course of the next 6 years, the spacecraft will use Venus gravity assists to spiral closer to the Sun, and make measurements even further into the previously unexplored solar corona. Scientists at the Smithsonian Astrophysical Observatory, including Drs. Korreck and Stevens, will be responsible for maintaining a website where the data from the SWEAP instruments will be distributed to researchers around the world.

"It is an honor to create this amazing product and to share it with the community," said Dr. Korreck, "I am excited for the future, thinking of all the transformational science that will be done with this data set for decades to come. This mission was 60 years in the making and with the rich data we are getting back it is already worth the trip and we are just getting started!"

More information about the Parker Solar Probe Mission can be found at:
http://parkersolarprobe.jhuapl.edu/

Information about the SWEAP instruments can be found SWEAP website:
http://sweap.cfa.harvard.edu