Two galaxy clusters were observed in a crucial early epoch of the merging process. 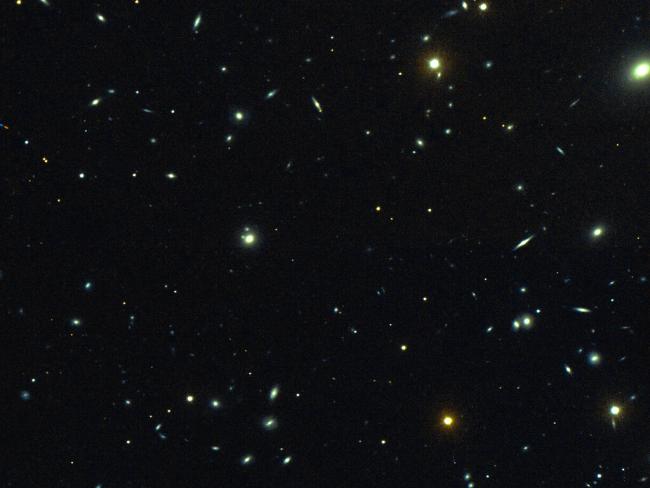 Cambridge, Mass. – Arnab Sarkar, a predoctoral fellow at the Center for Astrophysics | Harvard & Smithsonian (CfA), has revealed data and images that — for the first time — confirm the existence of a shock wave created between two galaxy clusters early in the merging process.

Sarkar is currently a graduate student in the University of Kentucky Department of Physics and Astronomy who works closely with Scott Randall. Randall, an astrophysicist at the CfA, serves as Sarkar’s academic advisor, providing supervision and thesis guidance.

Galaxy clusters are the most massive, gravitationally bound systems in the universe. When two galaxy clusters collide, theories predict that their first contact would create a shock wave between them. For the first time, Sarkar and his team detected such an axial shock between two clusters that are about to merge.

Sarkar says this is a very important confirmation in understanding the assembly of structures in the universe.

“With this discovery, we caught two sub-clusters of a galaxy cluster in a crucial early epoch of the merging process, with a strong shock between them, providing a missing link to the formation of the most massive structures in our universe,” he says.

The shock was detected using the Chandra X-Ray Observatory, in a galaxy cluster known as Abell 98, which lies more than 1,200 million light-years away from Earth. The strong shock wave Sarkar and his team detected travels at a speed of 4.5 million miles an hour between two sub-clusters, which is 20,000 times faster than the fastest Formula 1 cars.

Sarkar notes that catching galaxy clusters early in the merging process is very rare. Because they are millions of light years apart from each other. The axial shock waves predicted by the theory at the initial phase of their merger were never observed before. Detection of such a shock in an early- stage merging cluster was, therefore, a long-standing missing piece of the puzzle of galaxy cluster formation.

“This result is important because different computer simulations seem to be telling us different things about what we should observe early on in a galaxy cluster merger,” Sarkar says. “Here, we have a picture of what this process actually looks like, and that can be used to inform our theoretical models.”

Sarkar presented his findings on Thursday, June 16, during a briefing titled “Discovery of a Pre-merger Shock Wave in Abell 98: A Missing Piece in Building the Most Massive Structures in Our Universe.”

The study, “Discovery of a pre-merger shock in an intercluster filament in Abell 98,” has been submitted to the Astrophysical Journal Letters.