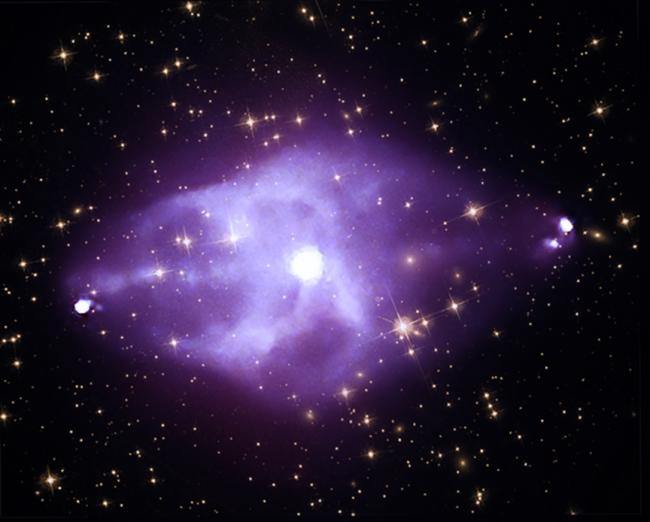 Astronomers have discovered behavior by a jet from a giant black hole that has never been seen before. Using NASA's Chandra X-ray Observatory they have observed a jet that bounced off a wall of gas and then punched a hole in a cloud of energetic particles. This behavior can tell scientists more about how jets from black holes interact with their surroundings.

The discovery was made in Cygnus A, a large galaxy in the middle of a cluster of galaxies about 760 million light years from Earth. Chandra data show powerful jets of particles and electromagnetic energy blasting away from a rapidly growing black hole at the center of Cygnus A. After traveling more than 200,000 light years on either side of the black hole, the jets have slowed down via its interaction with multimillion-degree intergalactic gas that envelopes Cygnus A. This interaction has produced enormous clouds of energetic particles that emits X-rays and radio waves.

In a deep observation that lasted 23 days, scientists used Chandra to create a highly detailed map of both the jet and the intergalactic gas, which they used to track the path of the jets from the black hole. The jet on the left expanded after ricocheting and created a hole in the surrounding cloud of particles that is between 50,000 and 100,000 light years deep and only 26,000 light years wide.

"Not only did we see this black hole jet rebound off intergalactic gas, in much the same way that a pebble would skip or ricochet off the surface of a pond, it then punched a hole in a cloud of energetic particles," said Amalya Johnson of Columbia University in New York, who led the new study. "This is the first time we've seen such a cosmic hole punch."

Chandra's sharp imaging was crucial for this discovery.

"It's remarkable that Chandra can capture intricate details in X-rays about what this black hole is doing more than a billion trillion miles away from Earth," said co-author Paul Nulsen of the Center for Astrophysics | Harvard and Smithsonian (CfA) in Cambridge, Mass. "Thanks to the Chandra data we can see where the jet ricocheted and follow its path before striking the gas a second time."

While best known for pulling things toward it, black holes are also adept at blasting material away from themselves. As the black hole spins, it can produce a rotating, tightly-wound vertical tower of powerful magnetic fields. This allows the black hole to redirect some of the energy released by gas spiraling toward it, creating an energetic jet traveling at very high speeds away from the black hole. The Cygnus A jet is one of the largest and most powerful ever observed.

The scientists are working to determine what forms of energy — kinetic energy, heat or radiation — the jet carries. The composition of the jet and the types of energy determine how the jet behaves when it ricochets, such as the size of the hole it creates. Theoretical models of the jet and its interactions with surrounding gas are needed to make conclusions about the jet's properties.

Energy produced by jets from black holes can heat intergalactic gas in galaxy clusters and prevent it from cooling and forming large numbers of stars in a central galaxy like Cygnus A.

"We know that rapidly growing black holes have a large effect on their environment," said co-author Bradford Snios, also of the CfA. "By studying Cygnus A we hope to learn more about how giant black holes affect their host galaxy over time."

Other materials about the findings are available at:
http://chandra.si.edu

Gamma-Ray Blazars in the Sky

Chandra Detection of a Circumnuclear Torus