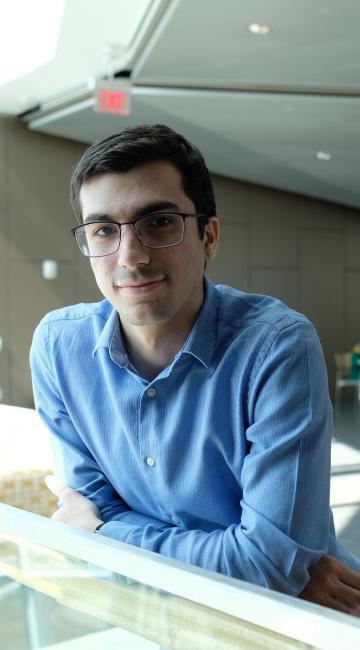 Joseph Farah, a first-year PhD student at the University California, Santa Barbara, and rising researcher with the Event Horizon Telescope, (EHT) has received the American Physical Society's LeRoy Apker Award. The award is the highest honor bestowed upon undergraduate physics students in the United States and is only awarded to two students annually.

Farah has been a member of the EHT collaboration since 2018 under the mentorship of Michael Johnson, an astronomer at the Center for Astrophysics | Harvard & Smithsonian. In 2019, Farah — along with more than 300 other scientists — revealed the first-ever image of a black hole.

At the time, Farah was a Smithsonian Fellow and the only undergraduate researcher on the international collaboration. He spent more than 4,000 hours working in Harvard and Smithsonian research groups, doing everything from helping run black hole observations and monitoring the weather at remote telescope sites to developing software libraries for interferometric data analysis and modeling.

"Joseph is a singularly creative and fearless researcher,” Johnson says. “From studying black hole shadows to making movies of rapidly changing structures, he is always pushing the boundaries of what we can study with the EHT. It is wonderful to see his hard work and clever insights recognized through the LeRoy Apker award!"

Farah earned a bachelor's degree in physics from the University of Massachusetts Boston in 2021. Today, he is studying supernova and experimental cosmology as part of the Las Cumbres Observatory (LCO) and the Global Supernova Project (GSP). This graduate research is funded by the National Science Foundation Graduate Research Fellowship Program.

Farah remains a member of the EHT collaboration as well. He is currently working on a scientific paper that describes imaging sources such as the galactic center on short timescales as part of the effort to image Sagittarius A*, the black hole at the center of our Milky Way galaxy.

"I've been incredibly lucky to be able to work with Michael and the EHT Collaboration for the last few years," Farah says. “This has been a completely unique and life-changing learning experience, which has prepared me for graduate school. I'm excited to continue collaborating with the EHT as we move on to space baselines, higher observing frequencies and new physics."