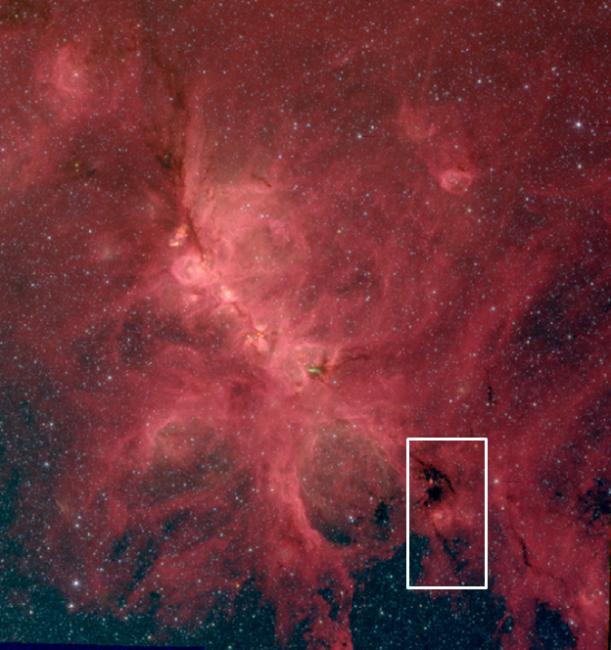 An IRAC infrared image of the massive star-forming complex NGC6334. Some theories suggest that turbulent gas motions inhibit low-mass star formation in molecular clouds like this, but facilitate high mass star formation. Astronomers have studied the gas motions in dense cores in the dark cloud NGC6334S, outlined by the white box, with very high spatial and spectral resolution. They find that, contrary to previous conclusions, the apparent turbulent motion of gas is often the result of low resolution observations that blend together the motions of two or more distinct gas volumes.

Molecular clouds in the Milky Way are generally very inefficient in forming stars; only about 1% of the available material ends up in a star. Astronomers think one reason is that star-forming cores are prevented from gravitational collapse by the pressure of turbulent, supersonic gas motions (that is, gas moving faster than the speed of sound). Four decades ago scientists noticed that the turbulent velocities of gas in clouds seemed to increase with increasing cloud size. The correlation has been used to argue that at the small spatial scales, where gas is ready to collapse, the supersonic turbulence has dissipated. This behavior would be consistent with newer observations in the far infrared which discovered that stars tend to develop along confined filamentary structures. These small scale structures would be difficult to hold together if they contained fast-moving, turbulent gas.

At least, this is the story for low-mass stars. Observations of young massive stars, however, seem to suggest the opposite conclusion. In many small cores where high density, high mass protostars are developing, the gas was found to be in supersonic motion. This result prompted a counter model in which high mass stars form precisely where gas turbulence inhibits low mass stars from developing -- until enough mass can accumulate for more massive stars to be born. Massive stars critically affect the galactic environment: their luminous radiation ionizes the interstellar medium, and their deaths as supernovae enrich the medium with heavy elements. Because of the cosmic importance of massive stars, astronomers have been probing the uncertainties in both the observations and conclusions.

CfA astronomers Shanghuo Li, Qizhou Zhang, Howard Smith, Joe Hora, and Shaye Strom led an investigation of star formation in the giant molecule cloud NGC6334S. Part of a much larger star forming complex, NGC6334S is unusual in that it lacks any massive star formation despite seeming to have all the right ingredients. The astronomers used the ALMA and JVLA telescope arrays to obtain high spatial (0.07 light-years) and velocity (0.2 kilometers/sec) resolution images of forty-nine dense cores along filaments in the cloud, with the core masses ranging up to fourteen solar-masses. The observations were able to resolve the structures into individual sources and to discover that apparently turbulent motions with high velocities were actually the result of two or more different volumes of gas moving with somewhat different velocities; they only appeared to be turbulent when the several sources were blended. In fact, the modest gas motions were very similar to those seen in low-mass star formation. The scientists argue that the lower resolutions used in previous studies led to the inaccurate conclusion that the gas was supersonic, when instead the sources are composed of multiple substructures. One implication of this result is that pressures external to the core (not internal gas motions) play a key role in developing the massive, dense protostellar cores.