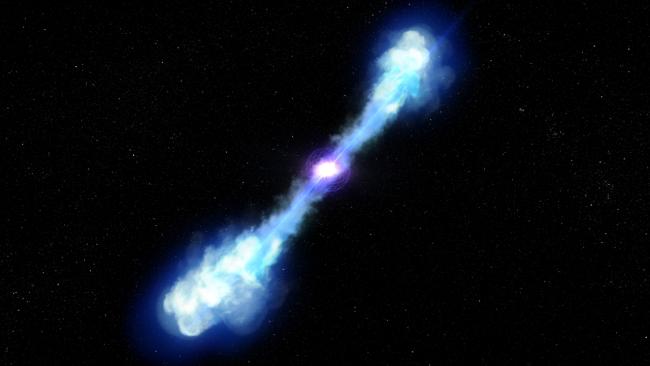 Cambridge, MA - Scientists today announced that they have observed the most luminous kilonova candidate on record, a find which challenges conventional theories of what happens in the aftermath of a gamma-ray burst. The findings appear in an upcoming issue of The Astrophysical Journal, and points to the possible of birth of a massive, highly magnetized neutron star called a magnetar.

Scientists first detected the flash of light on May 22, 2020, after it had traveled for 5.47 billion years to reach Earth. Using the Hubble Space Telescope, Swift Observatory, and multiple ground-based telescopes, the research team closely observed the short gamma-ray burst 200522A across the entire electromagnetic spectrum, from radio to X-rays. The research resulted in the collection of some of the most detailed—and baffling—observations ever for this extreme phenomenon, and the infrared emission detected by Hubble was 10 times brighter than predicted.

"The Hubble observations were designed to search for infrared emission that results from the creation of heavy elements—like gold, platinum, and uranium—during a neutron star collision, which gives rise to a short gamma-ray burst," said Edo Berger, an astronomer at the Center for Astrophysics | Harvard & Smithsonian, and principal investigator of the Hubble program. "Surprisingly, we found much brighter infrared emission than we ever expected, suggesting that there was additional energy input from a magnetar that was the remnant of the merger."

Scientists have long suspected that short gamma-ray bursts—gamma-ray blasts lasting less than two seconds—are produced by the collisions of neutron stars, extremely dense objects about the mass of the Sun but compressed into the size of a small city. When these collisions occur, scientists expect to observe a kilonova—the afterglow caused by the radioactive decay of heavy elements unique to the merger of two neutron stars—which is up to 1,000 times brighter than a traditional nova. And until today, the merger of two neutron stars was thought to produce a black hole.

The new observations have provided scientists with a more complete picture of the explosion, thwarting conventional theories about gamma-ray bursts. "These observations do not fit traditional explanations for short gamma-ray bursts," said Wen-fai Fong, an astronomer at Northwestern University in Evanston, Illinois, and lead author on the research. “Given what we know about the radio and X-rays from this blast, it just doesn't match up. The infrared emission that we’re finding with Hubble is way too bright. In terms of trying to fit the puzzle pieces of this gamma-ray burst together, one puzzle piece is not fitting correctly."

The team has discussed several possibilities to explain the unusual level of brightness they observed with Hubble. According to Berger, the misfit puzzle piece may have answered a big question. "What is left behind in such a collision: a more massive neutron star? A black hole? The fact that we see this infrared emission, and that it is so bright shows that short gamma-ray bursts indeed form from neutron star collisions, but surprisingly the aftermath of the collision may not be a black hole, but rather likely a magnetar."

The flash of light was originally detected by NASA’s Neil Gehrels Swift Observatory, and scientists quickly conducted follow-up observations of the afterglow, kilonova, and host galaxy with other telescopes, including Hubble, the Very Large Array (VLA), the Las Cumbres Observatory Global Telescope (LCOGT) and the W.M. Keck Observatory. For Fong, it was the Hubble observations that made the difference. "Hubble really sealed the deal in the sense that it was the only one to detect infrared light," explained Fong. "Amazingly, Hubble was able to take an image only three days after the burst. You need another observation to prove that there is a fading counterpart associated with the merger, as opposed to a static source. When Hubble looked again at 16 days and 55 days, we knew we had not only nabbed the fading source, but that we had also discovered something very unusual. Hubble’s spectacular resolution was also key in disentangling the host galaxy from the position of the burst and to quantify the amount of light coming from the merger."

Upcoming observatories and telescopes will make observations of similar events even more enticing, providing further clarification to what scientists now know about kilonovae. NASA's upcoming James Webb Space Telescope is particularly well-suited for this type of observation. "Webb will completely revolutionize the study of similar events," said Berger. "With its incredible infrared sensitivity it will not only detect such emission at even larger distances, but it will also provide detailed spectroscopic information that will resolve the nature of the infrared emission."