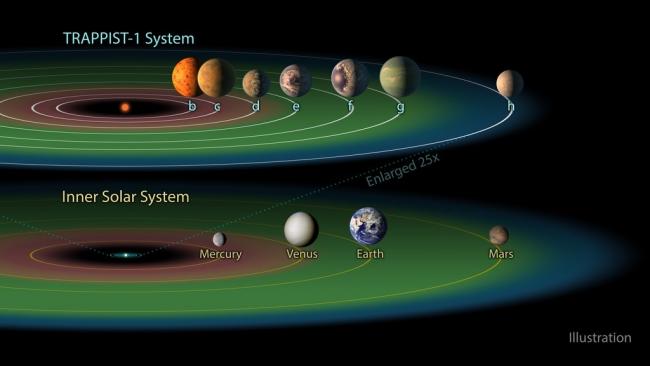 An illustration of the TRAPPIST-1 system of seven planets around an M-dwarf star.  The star has both strong UV and X-ray emission as well as an ionized wind that can evaporate the atmosphere of a planet orbting nearby. Astronomers have completed simulations using the TRAPPIST-1 system parameters that reveal the complex possible consequences of a stellar wind on a planet's atmosphere.

Most stars including the Sun generate magnetic activity that drives a fast-moving, ionized wind and also produces X-ray and ultraviolet emission (often referred to as XUV radiation). XUV radiation from a star can be absorbed in the upper atmosphere of an orbiting planet, where it is capable of heating the gas enough for it to escape from the planet’s atmosphere. M-dwarf stars, the most common type of star by far, are smaller and cooler than the Sun, and they can have very active magnetic fields. Their cool surface temperatures result in their habitable zones (HZ) being close to the star (the HZ is the range of distances within which an orbiting planet's surface water can remain liquid). Any rocky exoplanets that orbit an M-dwarf in its HZ, because they are close to the star, are especially vulnerable to the effects of photoevaporation which can result in partial or even total removal of the atmosphere. Some theorists argue that planets with substantial hydrogen or helium envelopes might actually become more habitable if photoevaporation removes enough of the gas blanket.

The effects of XUV radiation on exoplanet atmospheres have been studied for almost twenty years, but the effects of the stellar wind on exoplanet atmospheres are only poorly understood. CfA astronomers Laura Harbach, Sofia Moschou, Jeremy Drake, Julian Alvarado-Gomez, and Federico Frascetti and their colleagues have completed simulations modeling the effects of a stellar wind on an exoplanet with a hydrogen-rich atmosphere orbiting close to an M-dwarf star. As an example, they use the exoplanet configuration in TRAPPIST-1, a cool M-dwarf star with a system of seven planets, six of which are close enough to the star to be in its HZ.

The simulations show that, depending on the details, the stellar wind can generate outflows from a planet’s atmosphere. The team finds that both the star’s and the planet’s magnetic fields play significant roles in defining many of the details of the outflow, which could be observed and studied via atomic hydrogen lines in the ultraviolet. The complex simulation results indicate that planets around M-dwarf host stars are likely to display a diverse range of atmospheric properties, and some of the physical conditions can vary over short timescales making observational interpretations of sequential exoplanet transits more complex. The simulation results highlight the need to use 3-D simulations that include magnetic effects in order to interpret observational results for planets around M-dwarf stars.