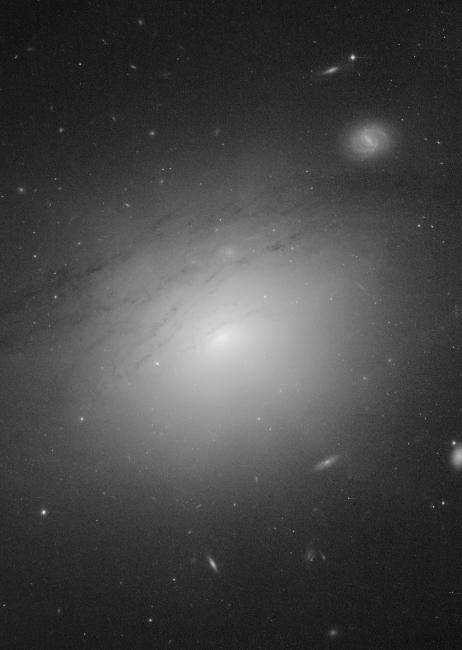 Cambridge, MA - Sparked by an image uploaded to Twitter, new research indicates that the light produced by black hole accretion may be bright enough to reflect off of dust, illuminating the host galaxy, and creating light and dark rays similar to the effect of crepuscular rays on Earth. The research is published in The Astrophysical Journal Letters.

When a supermassive black hole accretes, or "feeds," on the matter surrounding it, the resulting release of energy gives off an intense light. Until now, scientists believed that this light only illuminates the parts of a galaxy that fall within narrow ionization cones. But photographic evidence of IC 5063—a radio-loud Seyfert galaxy with an active galactic nucleus (AGN)—indicates that the light, or rays—which scientists liken to the crepuscular rays cast by clouds that obscure the sun near sunset—may be bright enough to reflect off of nearby dust, illuminating most of the galaxy, causing shadows from the black hole ring, or dark rays, in between.

"We think we’ve found evidence that there is probably dust all over the galaxy scattering light from the accreting black hole in the galaxy’s active nucleus, and that the light can illuminate almost the whole galaxy," said Peter Maksym, an astronomer at the Center for Astrophysics | Harvard & Smithsonian and lead author on the study. "We know that this galaxy recently had a merger with another galaxy and that could kick up dust everywhere. It’s also possible that the black hole jets are kicking up dust from near the nucleus."

Using images from the Hubble Space Telescope, the team focused in on IC 5063 and its torus—an unseen ring of cool, dusty gas surrounding the black hole—which might be the source of the light and its rays.

"The discovery shows that the torus, or ring, could be very thin—light seems to get out almost everywhere. If the torus is big enough it becomes unstable, the gravity and rotation holding it together point one direction near the black hole and in a different direction as influences from the galaxy start to become important. This looks like a warp or a bend," said Maksym. "It's possible that the warping creates big enough gaps for some of the light to shine through, and as the torus rotates, beams of light could sweep through across the galaxy like a lighthouse beams through fog. Scientifically, it's showing us something that is hard, and usually impossible, to see directly. This could have implications for anybody trying to understand the behavior of supermassive black holes and their environments."

Unlike most scientific research, the team observing IC 5063's strange rays assembled in a peculiar fashion: via crowd sourcing on social media. In December 2019, space image processing expert and citizen scientist Judy Schmidt noticed strange cones while processing an image of IC 5063, at first wondering if they were real, and if they were, whether they were galaxy-sized shadows, star streams, or something else.

"I noticed the dark rays almost immediately after I’d opened the file in Photoshop and began working to enhance them to make sure what I thought I saw was there. I couldn't see them in the archive thumbnails or the preview of the stretched image in FITS Liberator," said Schmidt, adding that when she first saw what appeared to be shadows, she thought, "That's not possible is it?" In her earliest tweets about the phenomena, Schmidt asked her followers, "Are these cones I’m straining to see real?" and "What are they? This is an active galaxy with a supermassive black hole in the middle. Is it casting galaxy-sized shadows? Or are those just star streams?"

It didn't take long for Maksym and other scientists to notice the tweet and start making conjectures, which eventually led to the formation of the research team and the discovery.

"Judy has a keen eye for what looks weird, which, as in this case, can have important scientific implications. In December, she noticed some 'dark rays' extending from the nucleus of the galaxy IC 5063 and Tweeted to her followers asking if they might be anything interesting," said Maksym, whose interest was immediately piqued since he was already working on the same galaxy from a different scientific angle. "Several of us chimed in and started speculating what could be causing the rays, and we really had no idea at first. When you read the Twitter thread, you can see how the ideas unfolded in real-time, and transformed into this really unusual research."

The discovery is still new, and scientists don't have all of the answers about the dust and its existence, or what’s really causing the dark rays; it has instead, opened an entirely new line of study and questions for scientists to ponder. "We don’t 100-percent know what’s going on; this whole discovery was unexpected," said Maksym. "Next, other scientists will test our conclusions with new observations and modeling, and we will start exploring other ways to look at IC 5063, in other wavebands, and with other instruments. This is a project that is just begging for new data because it raises more questions than it answers."