The TEMPO instrument will soon be integrated onto a satellite and tested to ensure that it can survive the space environment. 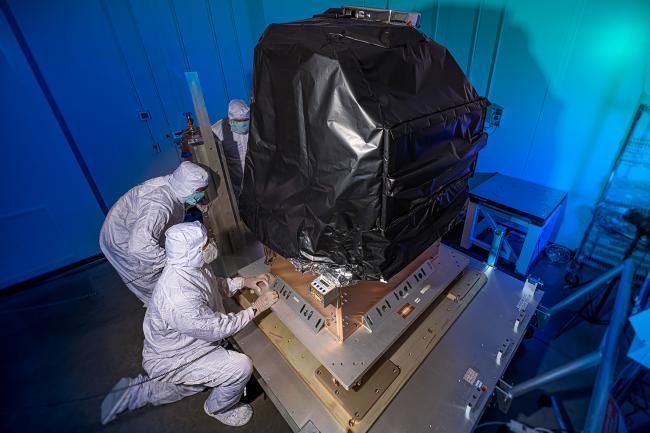 TEMPO, which is about the size of a dishwasher, will now be integrated onto Intelsat 40e, a communications satellite that will be launched into space in 2022 by SpaceX.

"This is an important milestone for TEMPO," says Kelly Chance, an astrophysicist at the Center for Astrophysics | Harvard & Smithsonian, who is also the principal investigator for TEMPO. "TEMPO will give us the capability to measure air pollution chemistry hourly for greater North America, including the lower 48 states, Mexico, Cuba, Puerto Rico, and Canada. Our goal is now much closer to reality."

Ball Aerospace completed building TEMPO in 2018. After its launch in 2022, TEMPO will take measurements of air pollution — including ozone, nitrogen dioxide and formaldehyde, and tiny atmospheric particles called aerosols — that can damage human health and the environment.

Some of the specific issues TEMPO will help address include rush-hour pollution in urban and suburban areas; transport of pollution from biomass burning and ozone production; air pollution from oil and gas fields; ship pollution tracks; and drilling platform plumes. These measurements will have implications for air quality forecasting and public health and will improve national pollution inventories.

TEMPO measurements will also have unique research applications. The instrument could be used to measure the extent to which the evaporation of water from corn crops, also known as corn sweat, worsens heat waves and air pollution in the Midwest. It could also help measure nitrogen dioxide that's released by farm soil, which occurs when it rains soon after the application of fertilizer.

"This is an exciting time for the mission," said Kevin Daugherty, TEMPO project manager at NASA's Langley Research Center in Hampton, Virginia. "We are about to begin integrating the TEMPO instrument with our host satellite and undergoing testing to ensure the satellite can survive the launch and environment of space."

From its geostationary orbit — a high Earth orbit that allows satellites to match Earth's rotation — TEMPO will also form part of an air quality satellite "virtual constellation" that will track pollution around the Northern Hemisphere. South Korea's Geostationary Environment Monitoring Spectrometer (GEMS), the first instrument in the constellation, launched into space last year on the Korean Aerospace Research Institute GEO-KOMPSAT-2B satellite, and is measuring pollution over Asia. The European Space Agency Sentinel-4 satellite, expected to launch in 2023, will make measurements over Europe and North Africa.