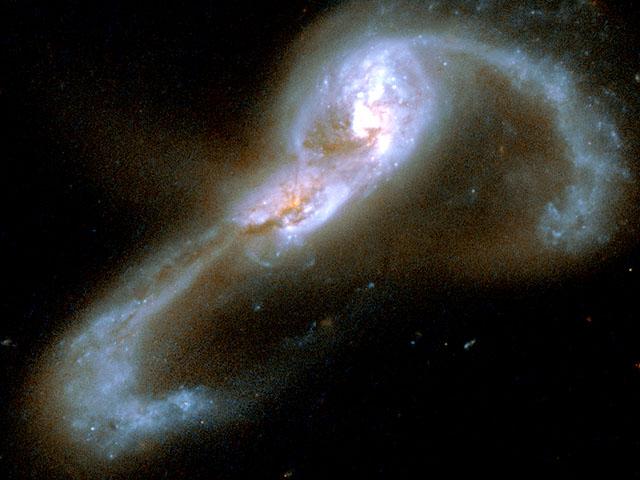 The colliding galaxy pair VV705. Astronomers have measured a set of merging galaxies to determine the relative contributions to luminosity from star formation versus from accretion around the supermassive black hole nucleus. For VV705, they find that nearly 75% of the luminosity comes from star formation.

Galaxy-galaxy interactions have long been known to influence galaxy evolution. They are commonplace events, and a large majority of galaxies show signs of interactions, including tidal tails or other morphological distortions. The most dramatic collisions trigger the galaxies to light up, especially in the infrared, and they are some of the most luminous objects in the sky. Their brightness allows them to be studied at cosmological distances, helping astronomers reconstruct activity in the early universe.

Two processes in particular are responsible for the enhanced radiation: bursts of star formation or the fueling of the supermassive black hole at a galaxy’s core (an active galactic nuclei - AGN). Although in principle these two processes are quite different and should be readily distinguishable (AGN, for example, produce much hotter ultraviolet and X-ray radiation), in practice the discriminating features can be faint and/or obscured by dust in the galaxies. Astronomers therefore often use the shape of the galaxy’s entire emission profile from the ultraviolet to the far infrared (its spectral energy distribution - SED), to diagnose what is going on. The dust that absorbs much of the radiation also re-radiates it at the longer infrared wavelengths and computer codes can model and unravel the numerous physical effects.

If bursts of star formation were responsible for powering luminous galaxies in the early universe, then many of today’s stars may have been formed in such events, but if AGN dominated, then there should have been more outflowing jets and fewer new stars. CfA astronomers Jeremy Dietrich, Aaron S. Weiner, Matt Ashby, Rafael Martínez-Galarza, Andrés Ramos-Padilla, Howard Smith, Steve Willner, Andreas Zezas, and two colleagues analyzed twenty-four relatively nearby, luminous merging galaxies to see how often and to what extent AGN activity powered the energetics. They extracted the most meticulous SED information in thirty-three spectral bands from seven NASA missions for these galaxies, correcting for backgrounds, confusion, and other extraneous signals. They then used a new computational code to fit the shape of the SED and to derive the most likely value of the AGN contribution, as well to measure the star formation rate, the dust properties, and numerous other physical parameters. The scientists tested the reliability of the code by using it on simulations of galaxy mergers and found excellent agreement.

The astronomers find that the AGN contribution in their sample of galaxies reaches as high as ninety percent of the total luminosity; in other cases it falls below twenty percent and is possibly negligible. The team makes efforts to relate the magnitude of the AGN contribution to the merger stage of the system (from beginning to coalescing stages), but their modest sample size limited the generality of the conclusions. They are expanding their analysis to several hundred other mergers in order to strengthen the conclusions.

Optical and Infrared Astronomy, Chandra X-ray Center
The Sloan Digital Sky Survey continues its twenty-year legacy of wide-field optical/infrared imaging and spectroscopy, which has led astronomy into the era of large archives and data science. Harvard and Smithsonian are both full institutional members of the latest epoch of the survey, SDSS-V, which started observations in 2020.
3

Optical and Infrared Astronomy, Harvard University Department of Astronomy
The H3 Survey is answering the question: how did the Milky Way Galaxy grow and assemble over cosmic time? To answer this question, a group of scientists at the CfA and the University of Arizona are mapping the outer limits of the Galaxy with >200,000 stars observed with the 6.5m MMT telescope in Arizona.
4