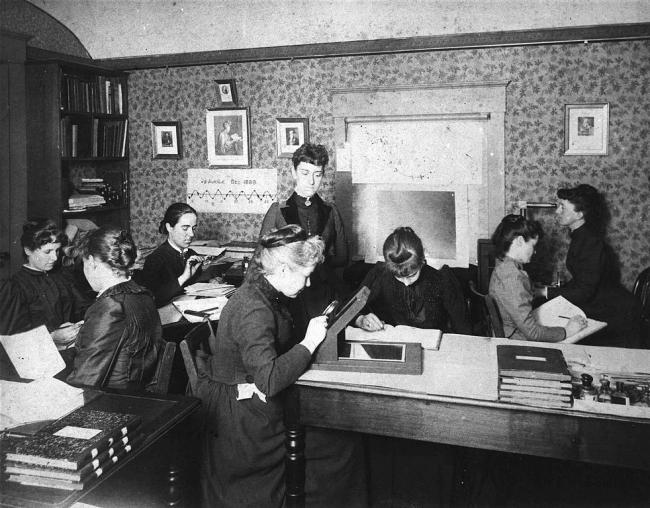 Henrietta Swan Leavitt, Annie Jump Cannon, Williamina Fleming, Antonia Maury, and other women "computers" at work probing the secrets of stars and the universe. Project PHaEDRA offers the public at home an opportunity to participate in astronomy research through examinations of their original notebooks.

People searching for productive ways to contribute to historical research or to science curriculum development while sheltering in place have a new hero. The Wolbach Library at the Center for Astrophysics | Harvard & Smithsonian is offering two different citizen transcription and science projects that people can volunteer to work on from their homes. The creative initiative is called Project PHaEDRA (Preserving Harvard's Early Data and Research in Astronomy) and it was recently featured in an article on the travel website Atlas Obscura, under the lead, "Even More Ways to Help Librarians and Archivists From Home" by Jessica Leigh Hester.

Project PHaEDRA builds on the remarkable and now almost legendary history of how skillful (but non-advanced degree holding) women data analysts working at the Harvard College Observatory (HCO) discovered fundamentals of astronomy from the classification of stars to their distances (this latter led directly to Edwin Hubble’s realization that the universe is expanding). Called "computers" by the HCO director Edward Charles Pickering (1846-1919), these brilliant and resourceful women analysts, including Annie Jump Cannon, Henrietta Swan Leavitt, and Williamina Fleming, along with the many dozens of other women working at HCO over the decades, made their discoveries with painstaking and meticulous analyses of tens of thousands of images of the sky taken by HCO at its observatories, principally in Peru but subsequently greatly extended (see, for example, Dava Sobel's popular new book, The Glass Universe). Key to participants in Project PHaEDRA is that these famous glass plates (today there are over 500,000 of them) have recently been digitized – and they include many of the first ever pictures of the visible universe.

The Project PHaEDRA initiative by the Wolbach Library and partners is designed to catalog, digitize, and transcribe over 2500 notebooks produced by early Harvard astronomers. Project PHaEDRA currently has two opportunities for volunteers at home to engage with the notebooks. The first is an ongoing project to transcribe each page from uploaded notebooks, which volunteers can access on the Smithsonian Transcription Center website. This project has already had many dedicated volunteers. The second and most recent initiative from Project PHaEDRA is Star Notes, a project based on the Zooniverse citizen science platform. Star Notes volunteers search through these notebook pages and work to identify the corresponding sky plate numbers they are commenting about. The data collected from this project will allow staff and researchers to connect the plate numbers with the digitized astronomical photographic glass plate collection from DASCH (Digital Access to a Sky Century @ Harvard). Star Notes was launched in January of 2020 and already has over 2,000 registered volunteers.

The recent Atlas Obscura article invites people to "gaze into celestial notebooks" by browsing through the digitized notebook finding aid and by volunteering to transcribe pages of the notebooks. We add that many discoveries are just waiting to made. Like the "computers" of the early 20th century, non-professional astronomers today can make important contributions to our understanding of the universe with their careful analyses of historic images, work that today can be done from the comfort of their homes.

Additional information on Project PHaEDRA can be obtained by contacting the John G. Wolbach Library, at library (at) cfa.harvard.edu