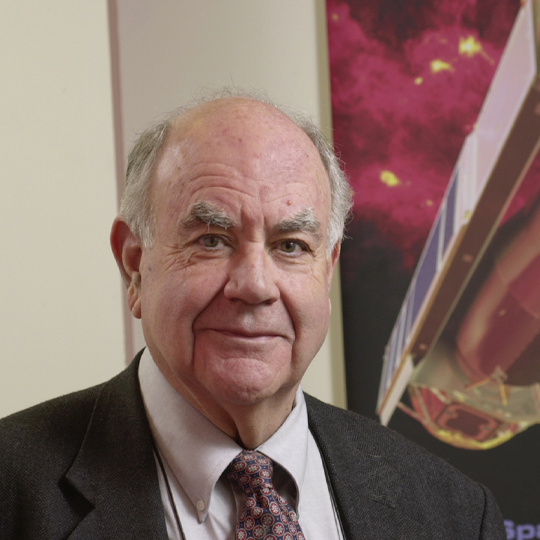 Dr. Fazio is presently Senior Physicist, Harvard-Smithsonian Center for Astrophysics; Lecturer, Astronomy Department, Harvard University; and Faculty Emeritus, International Space University, Strasbourg, France. He received BS (Physics) and BA (Chemistry) degrees from St. Mary's University, Texas, in 1954, and a Ph.D. (Physics) from the Massachusetts Institute of Technology (MIT) in 1959, having done his graduate work in elementary particle physics. The same year, he joined the Physics Department, University of Rochester, where he pioneered the development of gamma-ray astronomy using balloon-borne telescopes and was the Co-Principal Investigator for the gamma-ray telescope experiment on NASA’s first Orbiting Solar Observatory (OSO-1; 1962). In 1962 he joined the Smithsonian Astrophysical Observatory and the Harvard College Observatory, where he initiated a program in gamma-ray astronomy using balloon-borne and ground-based telescopes He initiated the construction of the 10-meter optical reflector at the F. L. Whipple Observatory, Arizona, to search for ultrahigh-energy cosmic gamma-rays. In the early 1970's he pioneered the development of large balloonborne telescopes for far-infrared astronomical observations above the atmosphere, and for twenty years was Principal Investigator for the 1-Meter Balloon-Borne Far-Infrared Telescope. He was also the Principal Investigator for the first infrared astronomical telescope to fly on the Spacelab II flight of the Space Shuttle (1985). In 1984 he was selected as Principal Investigator for the Infrared Array Camera (IRAC) experiment on the Spitzer Space Telescope, one of NASA's Great Observatories. The Spitzer Space Telescope was launched in August 2003 and terminated in January 2020. Dr. Fazio was also a Co-Investigator on the Submillimeter Wave Astronomical Satellite (SWAS; 1998). His current research interests include the development of infrared instrumentation and the use of infrared array cameras on ground-based and space telescopes to observe galaxy formation and evolution in the early Universe, black holes, ultraluminous galaxies, star formation and evolution, brown dwarfs, and asteroids.