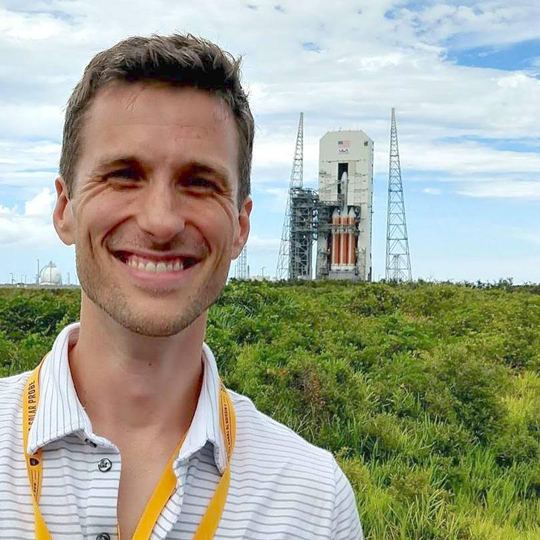 Michael Louis Stevens is an astrophysicist at the Center for Astrophysics and a physics educator specializing in peer learning models. He studies the evolution and interaction of plasmas in space, presently through experiments on board NASA's first mission into our Sun's corona, the Parker Solar Probe. His work has implications for the Sun-Earth connection, space weather forecasting, the safety of space travel, and the prospect of life on other worlds. He is a recipient of the NASA Silver Achievement Medal and has received special recognition for contributions to mission success.
Dr. Stevens received his PhD in physics from MIT in 2009, where he worked with the Voyager and Wind spacecraft missions to study the thermodynamics of plasmas and the topologies of magnetic fields in interplanetary space. He was a postdoctoral fellow at Boston University in the Center for Space Weather Modeling (2009-2011) before joining the Center for Astrophysics as a postdoctoral fellow and later an astrophysicist with the Smithsonian Trust. Presently, Dr. Stevens is a co-Investigator with experiments on two upcoming space missions -- the Europa Clipper, which is a mission to determine the habitability of the second moon of Jupiter, and Helioswarm, which is a mission to make measurements of plasma turbulence in space with a swarm of small spacecraft. He is a co-investigator on the SWEAP experiment on board the Parker Solar Probe, and leads data analysis for the Solar Probe Cup. Dr. Stevens' other roles include supporting the Deep Space Climate Observatory (DSCOVR), advising the NOAA Space Weather Prediction Center, and serving as instrument lead for the long-running Wind spacecraft Faraday Cup experiment.
Dr. Stevens has held teaching positions at MIT and at the Singapore University for Technology and Design.

Understanding climate change requires an understanding of Earth as a planet. The Deep Space Climate Observatory (DSCOVR) is a joint NASA-NOAA space observatory with two tasks: real-time tracking of conditions on Earth, and monitoring the solar wind — electrically charged particles streaming from the Sun. DSCOVR’s vantage point is a stable orbit between Earth and the Sun, allowing it to give us as much as an hour’s warning before solar storms hit, in addition to regularly-updated full-Earth images. Center for Astrophysics | Harvard & Smithsonian researchers collaborated on one of DSCOVR’s solar-wind instruments.