Gould’s Belt is a long chain of clouds in the Milky Way comprised of stellar nurseries and hot young stars. Stretching across a substantial part of the night sky, Gould’s Belt includes the Orion Nebula — the middle object in Orion’s “sword” — and a number of other star-forming regions. These regions are opaque in visible light, so the Spitzer Gould’s Belt Survey project used NASA’s Spitzer Infrared Space Telescope, the European Space Agency’s Herschel Space Observatory, and the James Clerk Maxwell Telescope in Hawaii to map the region in infrared and submillimeter light. The survey was led by scientists at the Center for Astrophysics | Harvard & Smithsonian, in collaboration with a number of other institutions around the world. Since the completion of observations in 2006, the data has continued to supply astronomers with insights into the formation of new stars in the Milky Way. 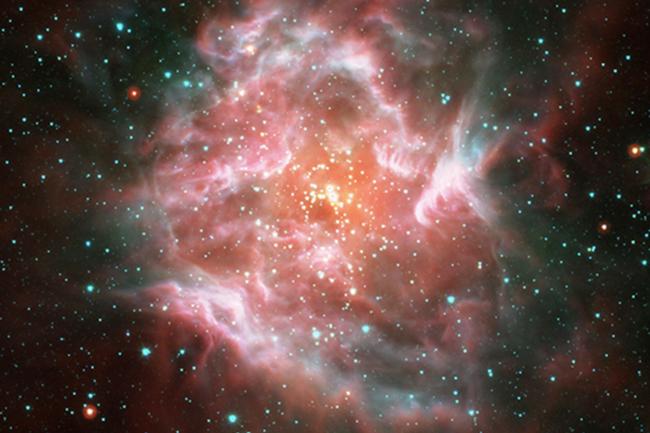 Jewels of the Night Sky

American astronomer Benjamin Gould identified the belt of bright stars and nebulas that bears his name  in 1879, while he was assisting the Argentinian government to establish a national observatory. Gould’s Belt stretches across a large portion of the sky, crossing constellations well-known in the Northern Hemisphere sky, including Orion, as well as several only visible from the Southern Hemisphere, such as the Southern Cross.

The Orion Nebula and several other large nebulas in Gould’s Belt are known as molecular clouds, which contain regions where new stars form. Significantly, the belt contains a number of hot blue stars; these live a relatively short amount of time, which necessarily implies they are young. Since its discovery, astronomers determined all the nebulas of Gould’s Belt are genuinely linked together in one strand roughly 3000 light-years long. Since the Milky Way is a spiral galaxy, it’s possible the structure is a small spiral arm or arm fragment.

The Spitzer Gould’s Belt Survey was designed to study star formation and young stars in this region, which is a relatively close 325 light-years from the Solar System. The survey, conducted primarily using the Spitzer Infrared Space Telescope with follow-up data from other observatories, used infrared and submillimeter light to peer into clouds that are opaque in optical wavelengths. That allowed astronomers to find both newborn stars and map the structure of the gas in the molecular clouds.

The observational portion of the survey is complete, but the data continues to be useful to astronomers studying star formation and galactic structure. The survey was led by astronomer Lori Allen, formerly of CfA and now at the National Optical Astronomy Observatory (NOAO), with collaborators at CfA, NASA, and the European Space Agency, along with a number of universities in the United States and Europe.