All the atoms and light in the universe together make up less than five percent of the total contents of the cosmos. The rest is composed of dark matter and dark energy, which are invisible but dominate the structure and evolution of the universe. Dark matter makes up most of the mass of galaxies and galaxy clusters, and is responsible for the way galaxies are organized on grand scales. Dark energy, meanwhile, is the name we give the mysterious influence driving the accelerated expansion of the universe. What these substances are and how they work are some of the major challenges facing modern astronomers.

Dark matter isn’t simply dark: it’s invisible. Light of all types seems to pass through as though it’s completely transparent. However, dark matter does have mass, which we see by its gravitational influence.

Studies of galaxies show stars and gas moving as though there’s a lot more mass than we can see pulling them along. Based on the motion of what we can observe, galactic dark matter resides in a “halo” surrounding the ordinary matter of the galaxy. Astronomers also study dwarf galaxies, which are less bright and therefore harder to observe, but which contain a higher fraction of dark matter than their larger cousins.

Galaxy clusters can contain hundreds or thousands of galaxies, each of which have their own dark matter halo. However, the cluster has its own dark matter, which outweighs everything else put together. This dark matter influences how individual galaxies and hot gas move inside the cluster. Astronomers can measure how much invisible mass is inside a cluster by the motion of the visible material, much as they do with galaxies. Researchers can also determine the amount of cluster dark matter by the way its gravity affects light. This effect is called gravitational lensing, and it provides an independent measure of how much mass is in a cluster and where it resides.

One particular galaxy cluster, known as the Bullet Cluster, provides some of the best evidence we have for the existence of dark matter. This cluster is made up of two smaller clusters that collided sometime in the past. During this collision, the hot gas interacted to produce a shock wave, similar to that made by a bullet. However, gravitational lensing shows that most of the mass of the combined cluster is collected around the galaxies, not in the center where the gas is. That provides us with the first independent measurement of how much gas and dark matter are in a galaxy cluster, where in most clusters the plasma and dark matter occupy the same regions.

Using fluctuations in the cosmic microwave background (CMB), astronomers determined that dark matter is about 27% of the contents of the universe, in terms of its overall contribution to the total mass and energy content of the cosmos. 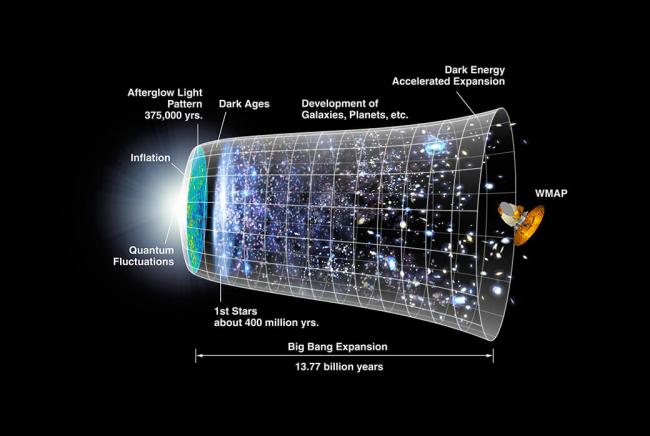 A timeline of the universe from the Big Bang at the left to modern times at the right. For much of that time, dark matter has governed the cosmos, forming galaxies and galaxy clusters; dark energy dominates the future, pushing galaxies ever farther apart.

In the 1920s, astronomers including Edwin Hubble discovered that galaxies seem to be moving away from us, and the farther they are, the faster they recede. Combined with Einstein’s general theory of relativity, researchers concluded that the universe is expanding, carrying galaxies along with it.

Then in 1998, two independent groups of researchers announced they had measured cosmic expansion to a higher degree of precision, and found that it was getting faster. This acceleration implies some unknown force is counteracting gravity to make the universe expand at a greater rate.

We call that mysterious force “dark energy”. Despite the name, dark energy isn’t like dark matter, except that they’re both invisible. Dark matter pulls galaxies together, while dark energy pushes them apart.

Astronomers measure the expansion of the universe using the explosions of white dwarfs, called type Ia supernovas, which led to the discovery of dark energy in 1998. They also use thousands of galaxies to map sound waves called baryon acoustic oscillations (BAO) produced when the universe was young, which stretch as the universe expands. In addition, CMB measurements show dark energy contributes about 68% of the total energy content of the universe.