Galaxy clusters are the largest objects in the universe that are held together by their own gravity. They contain hundreds or thousands of galaxies, lots of hot plasma, and a large amount of invisible dark matter. The Perseus Cluster, for example, has more than a thousand galaxies and is one of the most luminous sources of X-rays in the sky. Galaxy clusters are home to the biggest galaxies in the known universe, and provide us with information about the structure of the universe on the largest scales.

A Recipe for Galaxy Clusters

Even though “galaxy” is right there in the name, galaxies are the smallest of the three ingredients making up a galaxy cluster. The stars and gas in cluster galaxies only make up about 5% of the total mass. Meanwhile, about 80% of the mass in a cluster is in the form of dark matter, which holds everything else together. The huge amount of dark matter in a galaxy cluster produces enough gravity to bend the path of light passing by. That bending, called “gravitational lensing”, turns clusters into giant telescopes, magnifying galaxies that would ordinarily be too faint for us to see. In addition, lensing lets astronomers map where the mass in a galaxy cluster is located.

At 15% of the total, the second most massive contribution to galaxy clusters comes in the form of hot plasma — gas where the electrons have been stripped from their atoms —  which fills much of the space between the galaxies. This gas shines brightly in X-ray light, and affects radio light shining through the cluster from more distant sources. As a result, the plasma provides several independent ways to detect and study galaxy clusters.

And finally we have the galaxies themselves, which may weigh in the least, but are still very important. The largest galaxies in the universe live in clusters, and interactions between cluster galaxies are a laboratory for understanding how these huge monsters form. In addition, the galaxies host supermassive black holes, which can have a profound effect on the whole galaxy cluster. 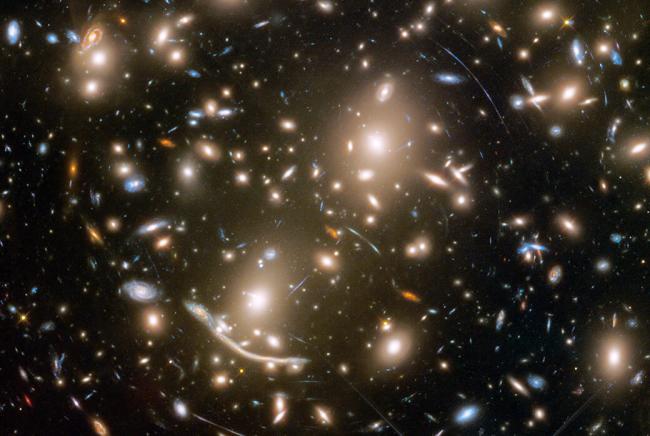 The galaxy cluster Abell 370 contains several hundred galaxies held together by their mutual gravity. The cluster's hot gas and dark matter may be invisible in this image, but their mass forms a gravitational lens, distorting images of farther galaxies into smears of light.

Those supermassive black holes drive powerful jets of matter that can be larger than the galaxies themselves. The jets carve out bubbles in the material between galaxies, known as the intercluster medium (ICM). These bubbles show up as cavities in the surrounding X-ray-emitting gas, ringed by a bright boundary where the plasma is compressed. The black hole bubbles can throttle the formation of new stars in the galaxies by altering the temperature and density of the gas throughout the cluster.

Additionally, black hole “winds” push some of the interstellar gas in cluster galaxies into the ICM. While most of the ICM is hydrogen and helium plasma, interstellar gas contains relatively high amounts of heavier elements like oxygen and carbon, produced by the galaxies’ stars. In that way, the black holes change the chemical composition of the ICM. The properties of the hot gas are therefore very important for understanding the complex interaction between black holes, intergalactic plasma, and star formation inside galaxy clusters.

Holes in the Ancient Universe

When light from the cosmic microwave background (CMB) passes through a galaxy cluster, it picks up some of the energy from the electrons in the hot plasma, like two pool balls colliding. The extra energy in the light means it disappears from the CMB, so a galaxy cluster looks like a “hole”. This property of galaxy clusters is called the Sunyaev-Zel’dovich effect, and it helps astronomers find galaxy clusters even if they’re too far or faint to be seen easily by the light they emit. Observations of the Sunyaev-Zel’dovich effect help astronomers map out the large scale structure of the universe: the cosmic web made up by galaxies, clusters, and other matter.