Galaxies are home to most of the stars in the universe, and they form the beads of the cosmic jewelry that defines structure on the largest scales. But galaxies haven’t always been around, and they have changed over the universe’s 13.8 billion-year history. Astronomers study the ways galaxies form and evolve by comparing the different shapes across the history of the cosmos, and tracing how they came to look the way they do.

Our Galactic Home and Its Place in the Cosmos

Even though we can’t see the Milky Way from the outside, astronomers have been able to deduce its shape and many of its details from our inside perspective. Researchers also can compare the unique information we have from living inside the galaxy to what we observe in other galaxies.

Galaxies are a diverse bunch, though astronomers group them into a few categories according to features they have in common. Spiral galaxies, a category including the Milky Way, are the most common large galaxies in the universe. Researchers observe huge numbers of these galaxies to understand how their spiral arms form and how long those arms last.

Studies show that big galaxies are made from smaller galaxies, based on how populations of stars are distributed. Astronomers use that knowledge look for the oldest and farthest galaxies, which are the building blocks for the modern versions. While most of those are too small and far away to see directly, a few are visible when magnified by gravitational lensing. In other cases, astronomers can piece together indirect evidence about them without seeing the galaxies themselves.

Finally, researchers also look for galaxies in the process of merging or eating each other. These events can last a very long time, so any particular one we witness is more or less frozen at a moment in time during the merger. Looking at many of these, along with traces of past mergers, helps fill in the rest of the details, showing how the history of each galaxy gives it the unique appearance it has.

Nearly every large galaxy, including the Milky Way, is host to at least one supermassive black hole. Astronomers discovered that these black holes help shape their home galaxies by generating flows of material both toward and away from the galactic center.

Today, the Milky Way’s black hole is very quiet, but there’s evidence that in the past it was “active”, jetting out matter and churning the central parts of the galaxy. That’s in keeping with observations of other galaxies, which in earlier times were often host to the very active black holes known as quasars, blazars, and other phenomena. The Milky Way’s black hole, known as Sagittarius A* — pronounced “A star” — was likely one of these billions of years ago.

Understanding how black holes shape their host galaxies is part of the study of galactic structure and evolution. Astronomers have seen signs showing how black holes can throttle star formation or give it a boost, depending on circumstances. Additionally, when galaxies merge or eat each other, that changes the environment of the black holes. At least in some cases, both supermassive black holes end up at the center, where they might merge into a single even larger object. 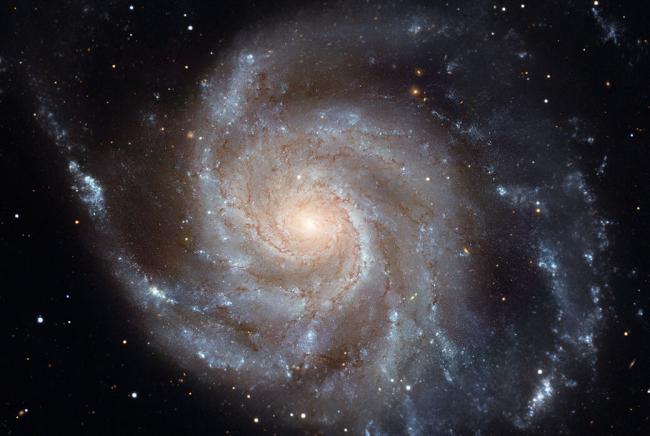 The galaxy M101 as seen by NASA's Hubble Space Telescope reveals its beautiful and complex spiral arms. Though spiral galaxies are the most common type of large galaxy, many details of how they form and evolve are still mysterious.