The newest branch of astronomy doesn’t rely on light. Instead, it measures gravitational waves: tiny ripples in the structure of spacetime created by colliding black holes, neutron stars, or other powerful cosmic events. Gravitational wave astronomy allows us to probe a new part of the unseen universe, with its own challenges and knowledge we can’t get other ways. 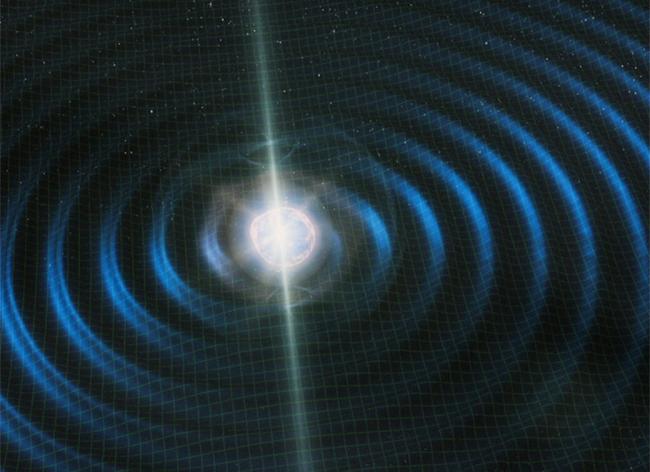 This artist's impression shows the final stage of the merger of two neutron stars and the gravitational waves produced by the collision. Astronomers identified such a merger in 2017 using gravitational wave detectors, as well as with optical and X-ray telescopes.

Gravitational waves, also known as gravitational radiation, were predicted by Albert Einstein as a consequence of his theory of general relativity. This theory describes gravity as distortions in the structure of spacetime created by matter and energy. Einstein realized those distortions would travel at the speed of light in the form of waves, much like light itself can be described as a wave.

However, gravity is so weak that even a high-energy gravitational wave barely nudges objects in its path. For that reason, our best hope is to detect gravitational waves from objects that produce very intense gravity because they pack a lot of mass into a very small space. That category includes the sources we’ve detected so far: colliding black holes and neutron stars.

Using both gravitational wave and light-based astronomy is known as “multimessenger astronomy”. This is an exciting development for researchers studying the structure of neutron stars, and understanding the creation of many chemical elements such as gold, which are produced in neutron star collisions.