Life in the Universe

Are we alone in the universe? That question actually contains several other questions inside it. Is Earth the only planet capable of supporting life? If there is other life in the cosmos, is all life built on the same basic chemistry? Is alien life necessarily constructed the same way as life on Earth? Does life require Earth-like planets to arise?

Some of these questions are easier to answer than others. Many astronomers focus on finding and characterizing exoplanets that might support life as we know it: Earth-like worlds with protective atmospheres, orbiting within a comfortable distance of their host star. Other researchers think broadly about the ways alien life might deviate from Earth-like life, based on what we’ve learned about exoplanets and worlds in our own Solar System. Others look for the chemical building blocks of life as we know it in interstellar clouds, to know how common these ingredients are in the galaxy.

Center for Astrophysics | Harvard & Smithsonian scientists, particularly those in the Solar, Stellar and Planetary Sciences (SSP) division, research the question of alien life in a number of ways: 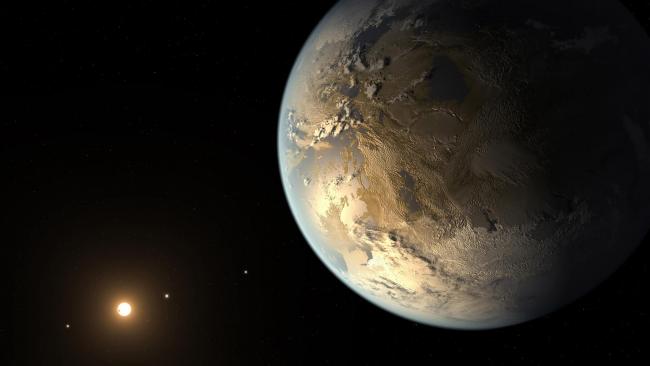 An artist's impression of Kepler-186f, a possibly habitable Earth-sized planet. Identifying planets that orbit within the "habitable zone" where liquid water can exist is an important step toward finding life elsewhere in the galaxy.

Other Earths, Other Suns

Most planets orbiting other stars aren’t very Earth-like. They’re typically much larger, and orbit closer to their host star than Earth does, because those are easier to find with any reasonable observational methods. Locating relatively small planets farther out from their star requires very sensitive instruments, beyond what we currently have.

In addition, many of the stars we’ve observed are cooler and redder than the Sun. This means the “habitable zone” — the range of orbits where liquid surface water is possible — is much closer in to the star. That means conditions for life in other star systems may be different than they are in the Solar System.

So far, astronomers have not found an Earth-sized world orbiting a Sun-like yellow star. In addition, we only know about the atmospheres of a small number of exoplanets. However, the information astronomers have collected is beginning to give us a picture of the variety of star systems in the Milky Way, and the sheer diversity of planets. It’s possible the conditions for life could be more flexible than our one example suggests.

Researchers also look at the chemistry of interstellar gas to see how common the basic ingredients of life are. Interstellar clouds contain water and many types of organic molecules, which are needed to make the more complex molecules that are the basis for life as we know it. Knowing how much of these chemicals are present in star systems at their birth helps determine how common the simplest ingredients for life are in the galaxy.

Finally, astronomers track newly forming planets, to compare with the theories of how the Solar System was born. Based on a variety of evidence, many scientists think the planets of the Solar System weren’t formed exactly where they are today, but that they migrated. So far, observations of protoplanetary systems bear that big-picture view out. Combined with the way molecules are distributed in newborn planetary systems, this reveals a lot about how different planets get their allotment of the raw materials for life as we know it.

Life and the Cosmos

“Life and the Cosmos” is a program of the Center for Astrophysics | Harvard & Smithsonian designed to bring scientists together across disciplines to investigate the origin and evolution of life in the universe. The question of how and where life originates is perhaps the most profound question for science, along with the physical and chemical processes and the environment that shapes it.

This research encompasses nearly all aspects of contemporary science: the astrophysics describing the formation of stars and planets; the geology, geochemistry, and atmospheric conditions for habitability of those planets; and the biochemistry, biology and ecology of life itself. These studies include research of past and present life on Earth, along with understanding the possibilities of life on other worlds.

CfA scientists are involved in every aspect of this multidisciplinary field. While these different subjects are often studied in relative isolation, the “Life and the Cosmos” program brings scientists with the relevant expertise together to collaborate on research dedicated to understanding the origin and evolution of life.

Explore Life and the Cosmos