The Milky Way alone probably contains hundreds of billions of planets, based on the thousands of exoplanets we’ve already identified. These planets share a history and origin with their host stars, and none of the star systems observed so far resemble the Solar System. Modern studies of planet formation include comparing exoplanetary systems, identification of protoplanetary disks around newborn stars, and computer models to trace the creation of planets from their origins in interstellar dust and gas.

Stars form from cold interstellar molecular clouds. As they collapse into protostars under the force of gravity, the remaining matter forms a spinning disk. Eventually the star stops accreting matter, leaving the disk in orbit around it. The leftover gas and dust inside that protoplanetary disk become the ingredients for planet formation.

Astronomers have identified a large number of protoplanetary disks, including some with gaps that might reveal the presence of a planet being formed. The structure of these disks provides clues to where planets form, and whether they change orbits after formation. 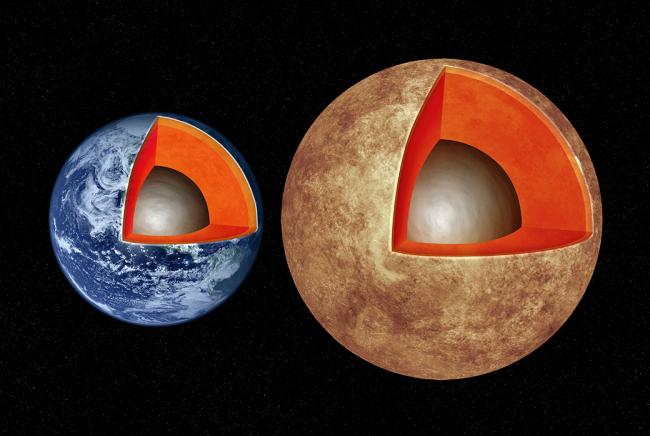 This artist's illustration compares the interior structures of Earth (left) with the exoplanet Kepler-93b (right). Even though the exoplanet is four times Earth's mass, research shows rocky planets all likely have the same internal structure.

Learning From Exoplanets and Their Host Stars

None of the thousands of exoplanetary systems discovered so far resemble the Solar System. While this is mostly because of the way we detect exoplanets, our understanding of planet formation has to account for the diversity of worlds we observe. Many exoplanets orbit closer to their host star than Mercury orbits the Sun, and quite a few star systems contain giant planets in the inner part of the system. In addition, several systems have multiple planets in orbits that are much closer together than any two planets in the Solar System.

Additionally, many known exoplanets orbit red dwarf stars, which are much less hot than the Sun. A number of these stars are also very active, producing violent flares that would likely affect the planet. Some other stars may have been too active during their early life to allow planets to form.

However, even the best observations of protoplanets and exoplanets aren’t good enough to reveal exactly how planets form and migrate. For that reason, astronomers develop computer simulations to understand how the protoplanetary disk produces the types of planets we observe, and how atoms and molecules are distributed to create the kinds of worlds we observe in the Solar System and beyond.